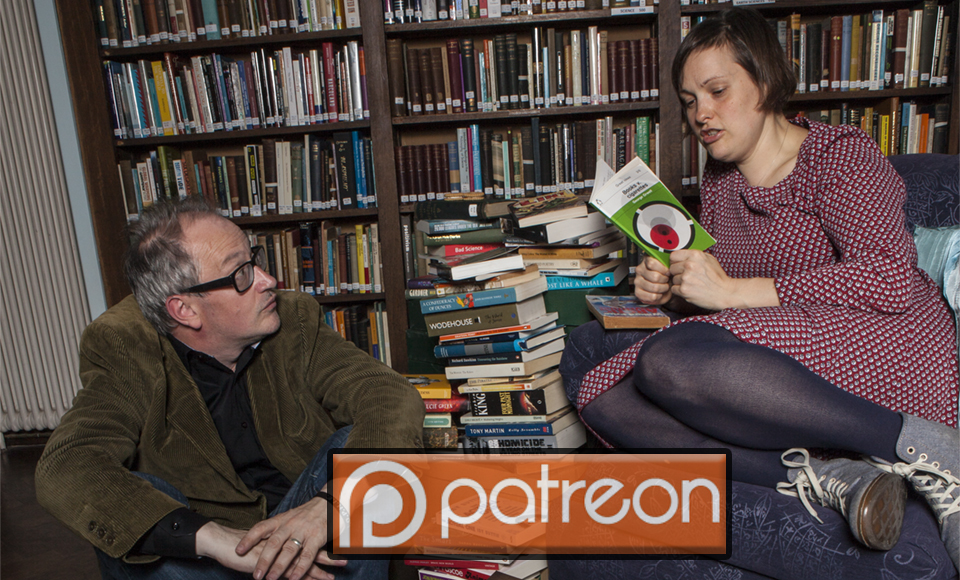 Thanks to the fabulous ongoing support of our Patreon pledgers we’ve been able to produce 91 episodes of Book Shambles over six seasons. As we move into Season 7 starting on Feb 1st, we’re changing the way our Patreon page works slightly. If you’re already a Patreon supporter, don’t worry, nothing changes for you other than the fact you’ll now get even more stuff! Read on to find out what we’re doing.

As you are no doubt aware, Book Shambles is part of the larger The Cosmic Shambles Network. Moving forward, this Patreon will help towards all the stuff we do at network, including Book Shambles. So that’s more podcasts, documentaries, live events, exhibitions and so on. If you’ve wanted to support us, but Book Shambles specifically wasn’t your thing, now you can get involved too!

Up until now, no matter how much you pledged, all supporters received the same; access to all our bonus and extended episodes on a private RSS feed. Don’t worry, you’re still going to get that regardless of your pledge level, but now we’ve introduced tiered rewards as well so if you want to contribute a little more, or if you already do, you’ll get more for your pledge!

Per Episode versus Per Month

We had a lot of discussion about this and have decided to keep with the ‘per episode’ of Book Shambles pledge structure for now. It’s important to note however you will never be charged for more than three paid posts per month. So if you contribute $1 an episode, you’ll never be charged more than $3 a month. $2 an episode, means $6 a month and so on. You can do the maths. Or math if you’re American.

If you just want to make a one off donation you can simply choose a tier and then pledge that amount. You can then cancel after your payment has been processed at the end of the month and you’ll still be eligible for that tier’s reward. This is particularly applicable to the higher tiers where obviously we don’t expect you to contribute that much each and every episode. Of course, if you’re some sort of ethical magnate and want to, we won’t stop you. With the higher rewards you will be notified of how to claim your reward once the payment has been processed at the end of the month. Or if you wish to make a higher pledge to get a specific reward, but want to keep accessing some of online content of a lower tier, you can pledge one month at the higher level, and then scale down.

As mentioned at the top, nothing changes for you. You’ll still get what you’re getting now, and maybe even more! Over the course of the next month you’ll be moved into the appropriate new tier. 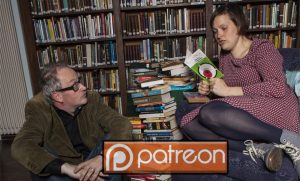 So, what are the rewards then?

You can view them all on the main Patreon Shambles page or just read them here.

Thank you. You will sleep sounder at night knowing you’re doing a good thing, supporting good content for everyone to enjoy. You’ll also get access to the Patreon only feed where you’ll get all the latest news plus extended uncut episodes of Book Shambles not available to the general public. Plus bonus mini episodes we record when out and about with people about their favourite books.

Get behind the scenes access to Cosmic Shambles productions. We’ll be periodically posting videos and blogs from the Book Shambles studio, the set of upcoming documentaries, back stage at our events and more. Plus extended episodes as per above.

All the other stuff above, but you’ll get access to stuff ahead of time as well. When new documentaries are released, you get them first. Brag to all your friends. Get advanced notice of when tickets for events go on sale. PLUS access to our new YouTube Livestream. Once every couple of months members of the Cosmic Shambles team and their contributors will set up the webcam and take questions from our Patreon people about what projects we’ve got coming up, what you’d like us to do, guests you’d like us to have on, that sort of thing. And we’ll be doing themed Q and A sessions too with writers, scientists, comedians and more.

All the other stuff plus access to the new and exclusive Cosmic Shambles Book Club. 6 times a year we’ll nominate a book. We’ll all read it. And then join us for a live Google Hangout to chat about it. The Hangout will feature Robin, Josie and special guests.

All that above, (this should be really obvious by now) plus we’ll send you an exclusive Book Shambles tote bag and notebook. Pics of both are below.

You’re officially amazing at this point. You’ll get all that other stuff up there, come on, we’ve been over this, plus you get a special Book Shambles or Cosmic Shambles shirt. Pics of shirts are below.

If you’re prepared to spend over a $100 for us to make high quality Shambles based entertainment, you’re clearly a wonderful person. Safe in the knowledge of that, you’ll get everything above plus be our invited guest to one of our live events. These will include things like Book Shambles live recordings, Nine Lessons and Carols for Godless People and more.

Be a guest on Book Shambles

Ok, so we don’t really expect you to contribute this much a month on an ongoing basis. I mean, if you want to, don’t let us stop you. But if you do it for one month, and then drop down to a lower level, you can come into our studio and be a guest on a mini episode of Book Shambles with Robin and Josie. Bring some of your favourite books, we’ll chat about them with you, and then put the episode out so all your friends can be super jealous of you. You are responsible for your own travel to London.

And here’s what the tote bags and shirts look like. If you came along to Nine Lessons at Conway Hall, you may have already spied them.

We hope you enjoy and take advantage of the new rewards. Without your support Book Shambles could not continue to exist. And no-one wants that! 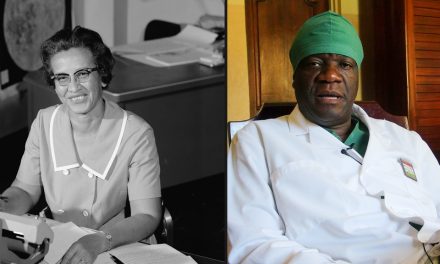 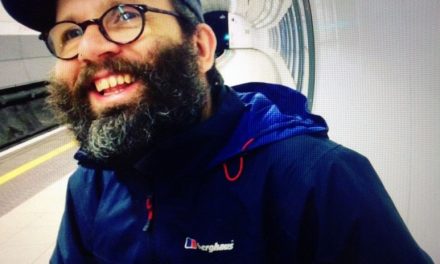