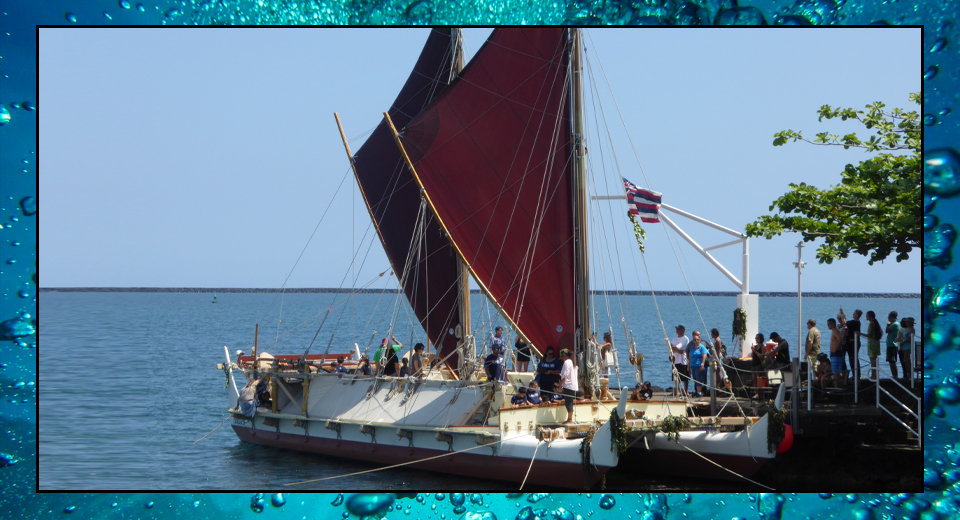 Today’s picture is one of mine, and this is the Hawaiian voyaging canoe Hōkūleʻa.

You can see from the picture that Hōkūleʻa is a relatively small boat, but she comes with a gigantic story.   It’s partly a historical tale of the Polynesian civilisation, covering centuries of careful and skilful trade and travel across the giant Pacific ocean.  And it’s partly a modern story, because Hōkūleʻa herself is a symbol of modern Hawaiians grasping the last opportunity to connect with their past, and using the knowledge they recovered as the foundation of their identity for the future.

The Pacific ocean covers more than 30% of the Earth’s surface, and the tiny islands sprinkled across its surface have been inhabited for a long time.  We know now that people arrived at those islands from the west, from what’s now Papua New Guinea via Indonesia.   Those journeys weren’t accidental.  The inhabitants of these tiny islands were masters of the ocean: capable of sailing and navigating without metal equipment, without maps recognisable by the western world, and they did it by being connected to the natural environment in a way that our own civilisation has forgotten.  The master navigators were the superstars of their time, piloting voyaging canoes like Hōkūleʻa between islands separated by thousands of miles.   But as the western world arrived, with its colonial habits, disease, modern ships, supply chains and missionaries, the old ways were almost forgotten.

In the 1970s, a group of Hawaiians led by Nainoa Thompson realised that there was a chance to re-build the ocean skills prized by their ancient culture.  The Polynesian Voyaging Society designed Hōkūleʻa based on their best understanding of the original voyaging canoes.  They persuaded one of the last Micronesian master navigators, Mau Piailug, to share his knowledge, and combined modern science and traditional techniques to teach themselves to navigate.

The stunning achievement that brought Hōkūleʻa into the global spotlight took place in 1976.  She completed the journey from Hawaii to Tahiti, a distance of more than 4000 km.  No modern instruments or charts were used, and the journey was successful, demonstrating to even the most trenchant sceptics that that ancient Polynesians had the skill and knowledge to make the vast journeys that tied Polynesia together.   This inaugural journey marked the start of a revival in Hawaiian culture and a renewal of the Polynesian ocean identity.  Today, many of the Polynesian islands have their own voyaging canoes, and there are traditional navigation schools all over the Pacific.

One blog isn’t anywhere near enough to contain the full story of Hōkūleʻa, and of the Hawaiians who were determined not to let their culture fade into history.  If you want to know more, I highly recommend Sam Low’s book “Hawaiki Rising”, and you can also read an overview on the website of the Polynesian Voyaging Society. We also spoke about Sam’s book, Hōkūleʻa and such things on a special episode of the Book Shambles podcast which I co-hosted with Robin Ince when the special guest was Kimokeo Kapahulehua, a native of Maui, who works to preserve and perpetuate his Hawaiian culture. It’s a reminder that although we think we know the ocean now better than ever before in human history, that knowledge almost all comes via machines and tools – we’re knowing, but remote.  True ocean human cultures have a different sort of knowledge, one that’s absorbed slowly and is woven into the environment.  We need both to really understand Earth’s blue.