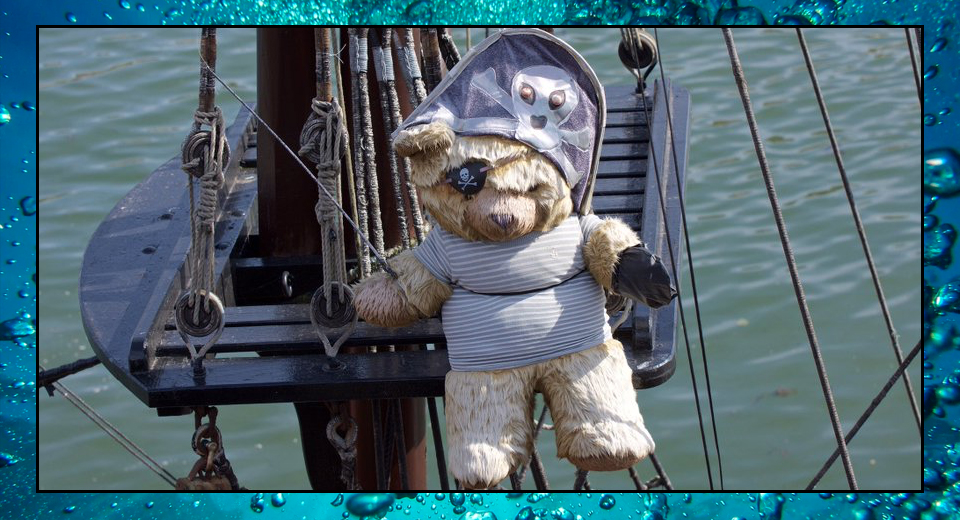 Sounds of the Sea by Michael Legge

Pirates make us think of sea shanties. So we turned to our music expert Michael Legge for his best sea songs.

The sea: majestic, mysterious, awesome. And the similarities between me and the sea don’t end there either. We’re both home to numerous weird animals (if you include my lice and worms) and we’re both often raging. Sometimes at each other. Well, more me raging at it, really. Because, as much as I’m attracted to the sea and love looking at it, I’m absolutely terrified of it.

I am scared of the sea.

Anyone who knows me knows that even the mere mention of the sea word throws me wildly into a blind panic. It’s just not for me at all. I like looking at it, but I couldn’t bear to touch it. I very much treat the sea in the complete opposite way to how I treat myself. I don’t hate the sea, of course, I’m just scared of it and for one very good reason. When I was 6 my parents took me to see Jaws.

The evil bastards. It was 1975 and the Legge family were holidaying in a caravan in Ireland during the summer and after the film I was utterly traumatised. On the drive back to the caravan I talked constantly about how I wasn’t scared of Jaws at all, despite hiding my face in my Dad’s jumper during the two-holes-in-the-sunken-boat scene. I bragged a lot about how if Jaws was here, I would beat him up with my bare hands, yet later that night I was scared to ask for a glass of water in case a Great White Shark came out of the tap. After that I got obsessed with sharks. I only read shark books from the library and tried to learn the names of all the deadliest sharks that terrified me: the blue shark, shortfin mako, the tiger shark, Bruce. They all terrified me, and I couldn’t stop looking at them. I asked my parents to take me to see Jaws again and once again I was shit scared of it. I paddled about in the sea any chance I could after that, but I was always worried that Jaws would get me. Not any shark mind, it was definitely Jaws. A few shark obsessed years went by and Jaws 2 came out. And that was it. The SAME beach got attacked by the SAME kind of shark and was destroyed by the SAME MAN? This was too much of a coincidence. I never got into the sea again. 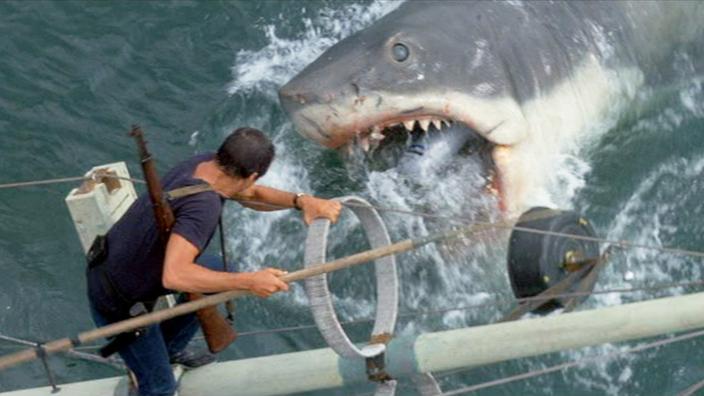 That’s the rationale that my mind used when I was a child and still uses to this very day. When people say that it’s safe to swim “here” I just think well, that’s what happened on Amity Island, isn’t it? That was “safe”. Yet TWO Great White Sharks, the deadliest animal known to man, hunted and killed there. I mean, are you really telling me that sharks can’t get lost? Not even one of them can go off course and end up here in Rhyl? I think not, matey. And then they roll their stupid eyes and say “Well, just paddle in the water for a bit. You’ll like it”. IDIOTS! Sharks can attack and kill in 1mm of water, and just because they definitely can’t doesn’t mean I’m wrong. Plus, there are other animals in the sea. Jelly fish, crabs and seaweed. Alright, seaweed isn’t technically an animal, but evil fish could be hiding in it and, anyway, it feels all funny on my leg and I don’t like it.

You might think I’m being completely stupid but this is how I have thought since 1975. I’ve had a 35 year old phobia of the sea and I definitely haven’t been in the sea since I was about 10. Sometime in the ’90’s, I went on holiday to Majorca with my then girlfriend who was hell bent on curing me of my phobia. She loved swimming in the sea and wanted me to love it too. The dick. She worked hard on persuading me to get in the sea and eventually I compromised and agreed to get into a pedalo shaped like a rubber duck. We went 8 feet out into the sea when I started gasping for air. She smiled at me and told me that if I relaxed, I’d enjoy it. I must have shouted bastard a thousand times that day. I say day, I lasted about two minutes before she steered the pedalo back to dry land. It was nice that she cared but obviously she wasn’t prepared to be screamed at by a fully grown man in a yellow rubber duckie. Not that she gave up. The next year we went to Florida and I accidentally ended up in a tiny row boat (it’s a long story but I was definitely tricked). I was uncomfortable in the boat, but she assured me that these were safe waters. That’s when I saw the dorsal fin appear.

It was the pedalo all over again, although this time I had a reason to be shouting at her. A shark was about 20 feet from us and I was about to die. She explained that it was a dolphin and that dolphins were harmless. What a stupid bastard she was. What? ALL dolphins are harmless? There’s no chance that ONE of them will go “Fuck this” and just attack? What? I suppose all dolphins are the same to you, eh? Racist.

We split up soon after that. I think she still sees the dolphin.

So, that’s that. I will never go in the sea. I realise that means I’m missing out on a huge experience, but at least I’ve got music. Plenty of great songs about the sea make me feel like I’m not missing out as much as I clearly am. Deep Blue Day by Brian Eno is a perfect piece of music to make you feel like you’re actually floating on a raft, on a calm blue sea, under a friendly, warm sun. Sadly, it also makes me feel like I’m swimming through the stinking waters of “the worst toilet in Scotland” to pick up some opium suppositories, but that’s hardly Brian Eno’s fault.

I’ve always loved the raucous, ragged sound of Fisherman’s Blues by The Waterboys. It’s the sound of fiddles blazing while waves crash. You can taste the salt in the air. Broken hearts soundtracking their last party, passing round the whiskey and howling at the moon while the waves threaten to take them under. If I wasn’t such a coward, I’d be on that boat with them. But, obviously, putting all the fish back.

Another track that makes me feel like I’m actually experiencing the sea itself is the excellent and daft Blue Pedro by electronica musician and DJ Bullion. It’s amazing to watch people dance to this in clubs (because I’m ALWAYS going to clubs) and looking all cool before they finally twig that they’ve been “larging it” to a sea shanty. But really, it’s ‘Til I Die by the Beach Boys that takes the prize for feeling like you’re floating, floating, floating to your doom. Unlike so many of their songs, ‘Til I Die only really mentions the sea once, but it sets the tone for the rest of the song: floating, aimless, alone. And what is this sea, if not a metaphor for our own desperately alone lives? Good times!

I’ll never be a man who lives on the sea and neither will Nick Cave, but he does a great job of convincing us he’s an actual pirate. So many of his songs sound like they were written in a grog house after a shipwreck, plus he’s covered actual bona fide pirate songs. His version of Fire Down Below from the Rogue’s Gallery: Pirate Ballads, Sea Songs and Chanteys is pretty much what you’d expect. Dirty. In every way. But, god damn, does he make that song his own. Maybe it always was his? (I mean, the swearing is definitely his)

No list of sea songs would be complete without The Beatles’ classics Yellow Submarine and Octopus’s Garden and I’m fine with having an incomplete list. Those songs are shit and should be consigned to Davy Jones’s Locker for good. If it’s cute sea songs you’re after then go no further than the great band Ween who stop swearing for just over 2 minutes to give us Ocean Man, a brilliantly weird and jolly toe-tapper that was the inspiration for gritty television crime drama Spongebob Squarepants. Take that, Beatles! I’d like to see Yellow Submarine inspire a cartoon. Losers!

I’m not sure if Bjork’s The Anchor Song should be on a list of sea songs, so I’m putting it on mine. It’s the beautiful closing track on her classic album Debut and it’s about coming home. It’s weary, but it’s finally happy. And it is so Icelandic and salty. It sounds like it was written and recorded on a tiny Icelandic dock. Of course, it’s a sea song! And a beautiful one.

But the greatest song ever written about the sea is, of course, The Rime of The Ancient Mariner by Iron Maiden, but let’s not start an argument right at the end of an article, eh? Instead, please just enjoy the songs on the playlist. Pirate ballads, sea songs, shanties, techno floor fillers and metal anthems. Ah-har!

Michael Legge is a stand up comedian and writer who has performed all around the world. He is a previous winner of a Chortle Award for best blog and is a team captain on the popular podcast ‘Do the Right Thing’. His 2017 live show Jerk is available  from Bandcamp and his latest show The Idiot is out soon.. Michael can often be found both on The Cosmic Shambles Network and Vitriola yelling about music with Robin Ince. He is @michaellegge on Twitter. 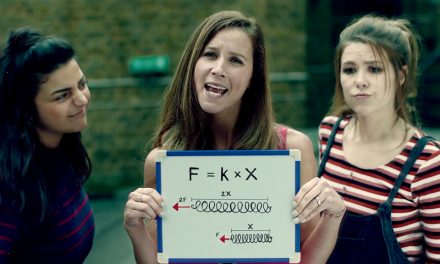 Push It, Pull It – SciTunes 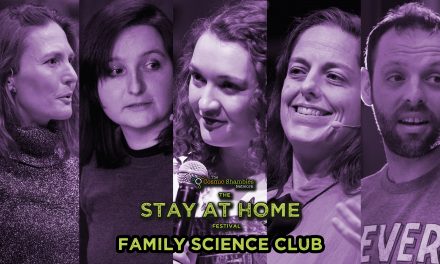 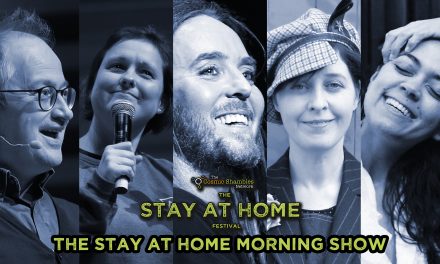