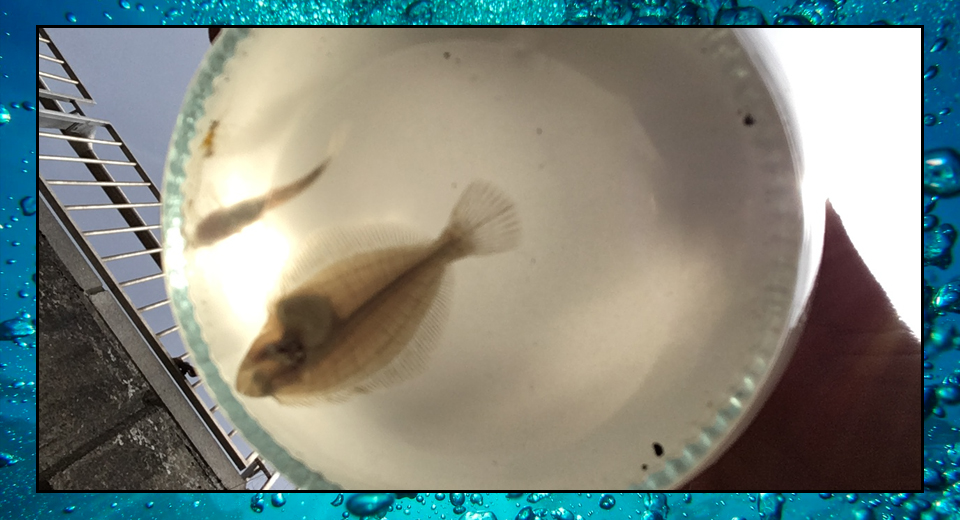 The Sea is Closer Than You Think by Dr Helen Czerski

Sometimes, the sea is closer than you think.

I took this picture last May while standing on the south bank of the Thames, just opposite the soaring modern glass and metal skyscrapers of Canary Wharf.   You’re looking up at the base of a jam jar, and it’s got a baby flounder in it.

I was there to record part of a Radio 4 programme about the Thames, to witness researchers carrying out a fish survey.   I’m a relatively recent Londoner – I’ve lived in this city for six years now – and it still astonishes me that most Londoners see the Thames as an absence rather than a presence.   It’s the biggest geographical feature of London, the connection between this great city and the global ocean, and yet it still seems to be largely invisible.  There is lots to say about the Thames, about it being far more healthy than most people think, about it being far more interesting than most people remember, and about poo in it mostly being a historical blip (my fingers genuinely typed shitorical blip on the first attempt, being better wordsmiths than me).  There isn’t space for all that here, but there is space to say that the thing that I love about that particular section of the Thames, the bit opposite all the glass and steel, is that it’s got a mini tidal wildlife sanctuary on it.  The contrast between city and nature is there, all in one photo frame. I reckon that most people would walk straight past the tidal sanctuary, only thinking that it’s an oddly vegetated bit of shore, but it’s not there for their benefit.  It’s there for the fish.

The fish survey was astonishing.  A long vertical ribbon-like net, perhaps a metre high and five metres long, was stretched out into the opaque river water and then slowly pulled around back to the bank.  And then the net was brought up on to the boat ramp and we peered at all the baby fish suddenly flapping in the sunlight.  They were quickly moved into a bucket to keep them happy until it was time to measure them, but just in that one net there were tens of young seabass, two baby flounder, and perhaps 20 other small fish.  I was unreasonably excited by the baby flounder.  That was partly because I could look at how far its lower eye had migrated round its head (flounder start off with one eye on each side, like a normal fish, and one eye moves around as the fish grows older, until they’re both parked on top when it’s big enough to scoot around on the seafloor.  Yes, really).   But it’s also because I hadn’t been expecting anything like a flatfish to be swimming around right in the centre of London.  I was soon put right – estuaries like the Thames are important nurseries for North Sea fish like the sea bass.   They’re important places for ocean fish.  The mini tidal wildlife sanctuary is part of the Estuary Edges project, and it acts as a safe haven for juvenile fish travelling up and down the Thames as an essential part of their life cycle.

We often think of the sea as being out there or over there or generally somewhere else.  Map-makers have the urge to draw clear lines between land and sea, between us and them.  But it’s not that simple.  The boundary between land and sea is often fuzzy, and the intertidal regions (the ones covered and uncovered with each tide) are critically important places.  Everyone who is lucky enough to live near an estuary has elements of the sea coming to visit them every day.  Even here, in this massive city, the ocean is coming to us.   And this baby flounder, which is hopefully swimming around out in the North Sea as a adult right now, was like a mini-herald reminding me of that beautiful fact.