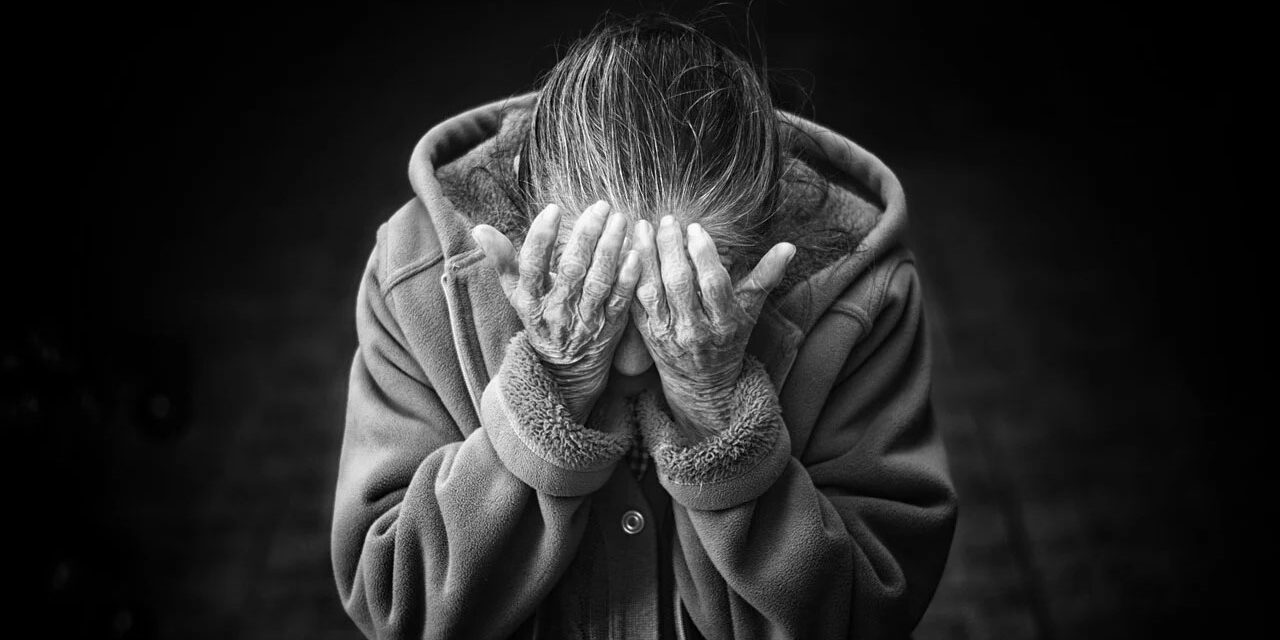 Grief is hard. I don’t think anybody would argue otherwise. 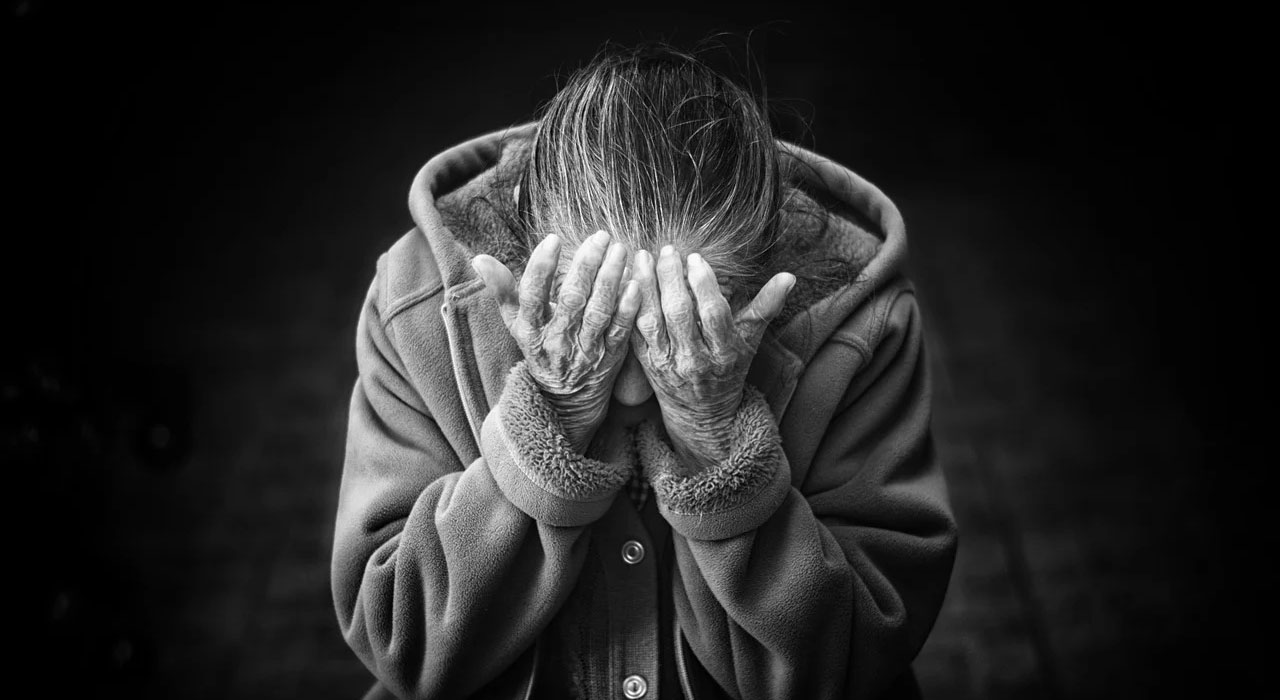 Grief is also unpredictable, more so than most would expect. Many believe that grief follows a predictable path, thanks largely to the Five Stages of Grief model, which has been referenced everywhere, from The Simpsons to Scrubs and beyond.

This tells us that, following the loss of someone close to you, you experience denial, anger, bargaining, depression, and acceptance. It’s widely agreed that grieving individuals go through all these stages, in this predictable order.

Unfortunately, what’s widely agreed is largely wrong. The five stages model has little to no empirical evidence to support it as an actual process, let alone one that everyone experiencing grief goes through. If anything, professionals telling people that they should be grieving in a certain way, and assessing their progress according to this supposedly set pattern, does more harm than good. It leads to the imposing of unscientific criteria and unrealistic expectations on people going through an intense, painful and complicated emotional process. And that’s rarely helpful.

In truth, people experience many different things during grief, sometimes repeatedly, and in no particular order. As I’ve said before, I lost my father to Covid back in April. He was 58, with no prior health conditions. It was particularly traumatic all around, and I’ve lost count of the number of supposed stages of grief I’ve gone through. 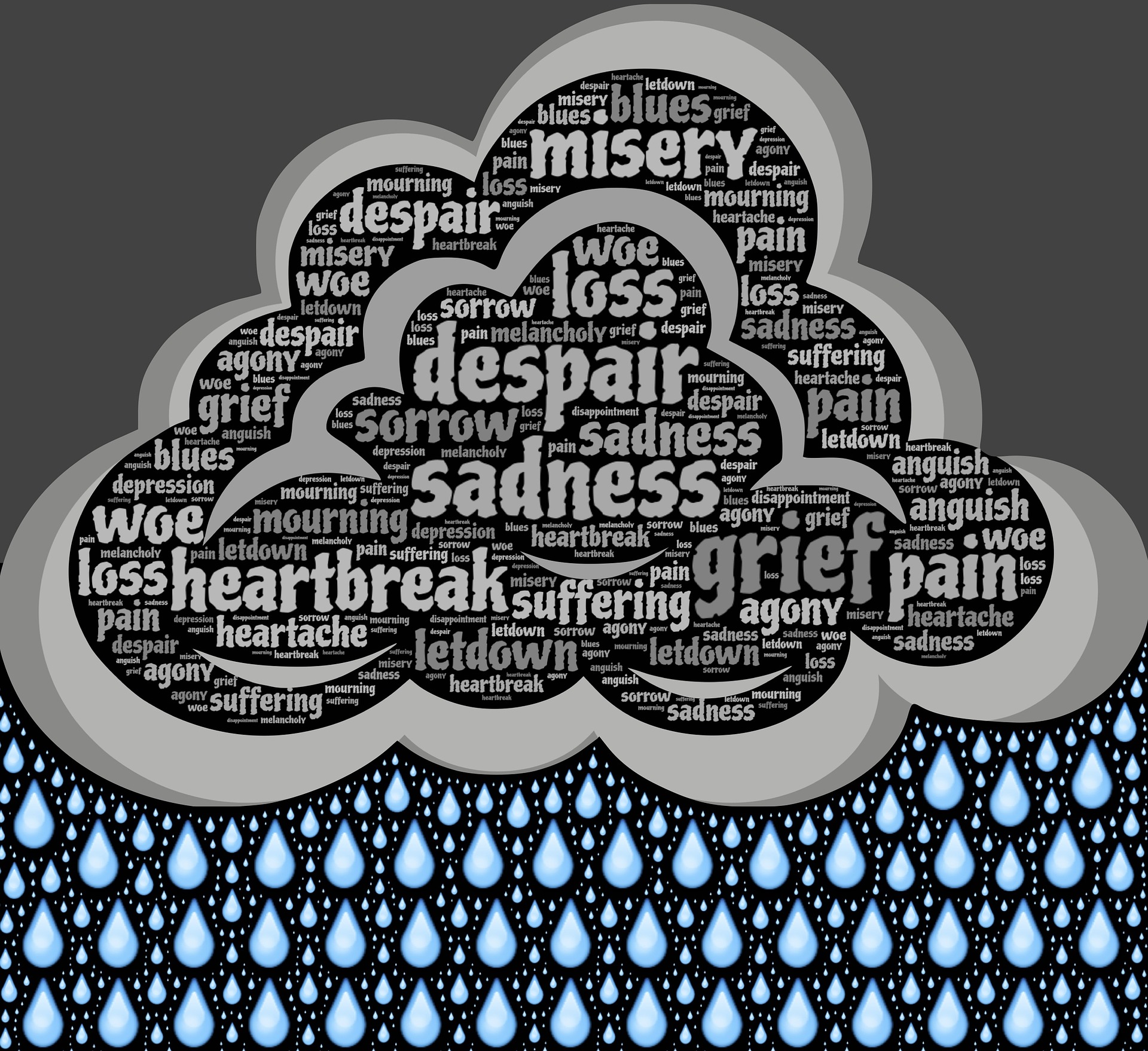 There is… a lot going on with grief

There was the ‘numbness’ stage, the ‘implacable anger’ stage, the ‘despair’ stage, the ‘anxiety’ stage, the ‘insomnia’ stage, the ‘too much wine’ stage, the ‘actually feeling OK for a change then feeling incredibly guilty because you feel OK’ stage, and more. Many people will have experienced similar grief reactions in recent month, what with the pandemic. Or gone through a wholly different set of experiences. All are valid, none are easy. Because grief is hard, and complicated.

However, thanks to how modern society works, those of us who have lost people to Covid have another stage of grief to contend with; the “having your loved one’s death publicly dismissed as an irrelevance or inconvenience by a contrarian pundit” stage of grief. It’s a very unpleasant one to deal with, due to the unnecessary casual cruelty of it all. But deal with it we grieving people must, because God forbid our pain should get in the way of all that precious web traffic and delicious clicks.

The latest prominent example of this, at the time of writing, comes from Allison Pearson of the Telegraph, via Twitter 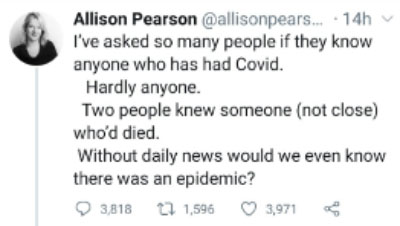 Why even say this? What’s the aim here? Dismiss the pandemic as a fuss over nothing? Convince people that there’s nothing to worry about, despite the tsunami of evidence showing the exact opposite? Suffice to say, if it’s claimed the life of someone close to you, it’s very difficult to see Covid-related deaths be dismissed so casually, yet so brutally, as inconsequential.

She’s not the first, though. Many have said similar things. A few weeks back, Peter Hitchens did a very similar tweet, suggesting that Covid is so minor an issue that we wouldn’t even know it was there if it wasn’t for the media amplifying it.

I obviously objected to this, for the obvious reasons already described. This led to Hitchens’ followers accusing me of lying.

That bears repeating; strangers accused me of lying, about the traumatic death of my father. You experience many things when grieving, but having your pain and loss dismissed or actively denied by strangers really shouldn’t be one of them. What purpose can it serve, other than to cause more emotional pain for those who are already dealing with far too much already?

And I know all the typical responses. “Just ignore her/them”, “Stay off the internet”, “Don’t engage”, and so on. But these nuggets of advice, however well meant, often aren’t practical.

I don’t follow or seek out Allison Pearson or any other type of tediously pseudo-controversial pundit. I actively avoid such types. But when they make these outrageous statements, the subsequently outraged share them far and wide, to register their disgust or offence. Or people take the piss out of it and end up on a content-aggregator site on an article titled “[Tedious Pundit] said something clueless, here are the only 17 brutal responses you need”. Either way, it gets shoved in the faces of people like me eventually, so we get exposed to the callous disdain for our losses, whether we like it or not.

I would also “stay off the internet” if I could, but in case you haven’t noticed, that’s where most of the world interacts right now. That pandemic, the one that robbed so many of us of our loved ones, is still ongoing, meaning face-to-face interactions are a no-no. So, it’s either go online, or stay completely isolated, at a point in your life where that makes everything worse.

And it’s all well and good saying ‘don’t engage’, but how does that help? If you’ve been exposed to the dismissal of a loved one’s death, the harm is done. Just swallowing the extra pain amounts to suppressing your emotional reactions, which is another thing that makes grief worse. Reacting, processing, responding to what you’re going through, that’s often the healthier approach to grief. Even if it doesn’t necessarily fix anything, at least in the short term. 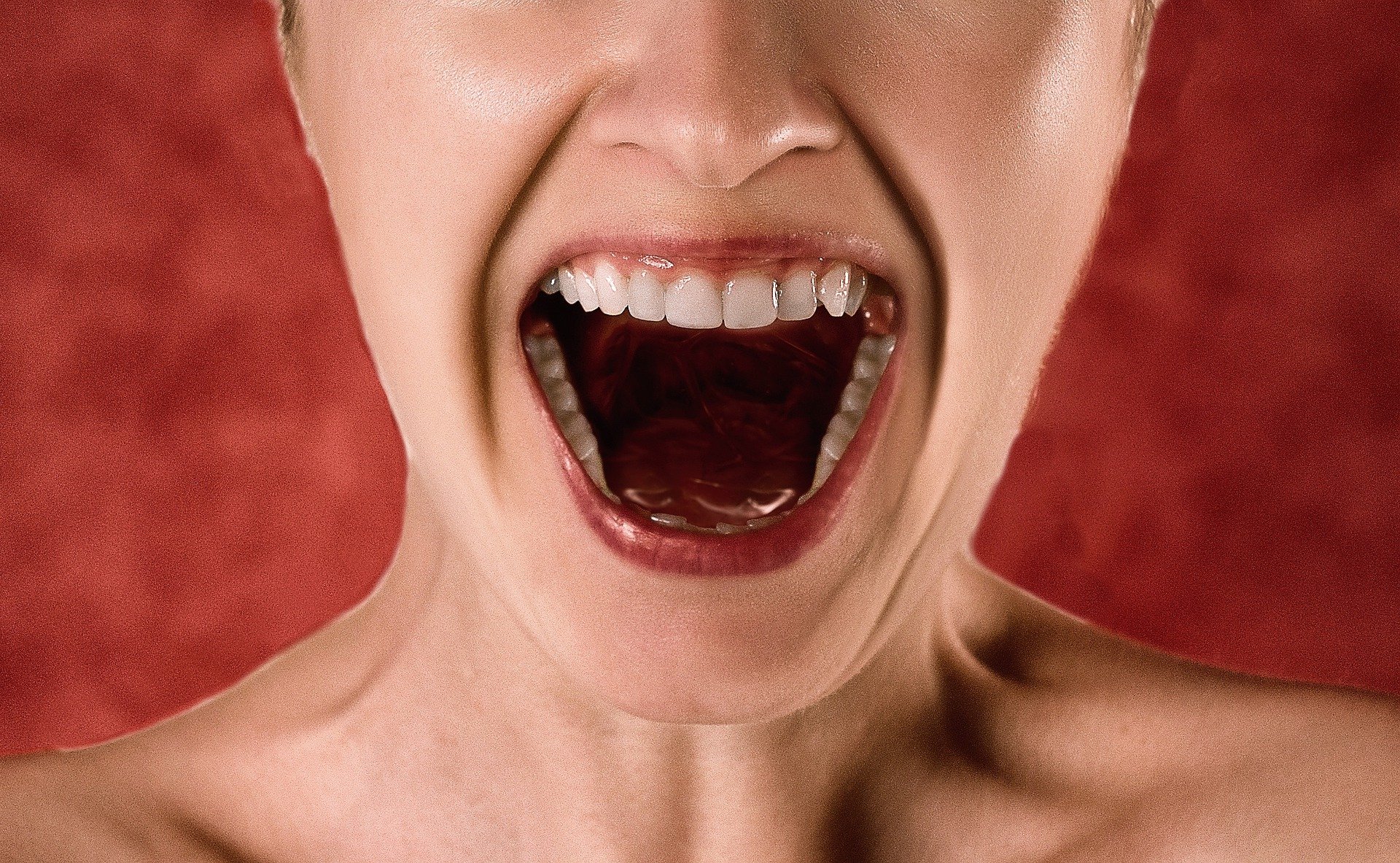 Grief can very easily lead to full-blown mental health problems, if it’s too severe or profound, or not processed effectively. And we’re currently experiencing a pandemic which, at the time of writing, has caused just shy of 65,000 deaths in the UK. Let’s be extremely conservative and say that each loss led to five people experiencing profound grief. That’s 325,000 people throughout the country, grappling with grief in the most difficult and challenging circumstances. I would really rather not have to include myself among them, but that’s not a choice I get to make.

As experts have pointed out, so many people experiencing grief and loss and isolation has all the makings of another pandemic, a mental health one, when this one is over. That would add an even greater burden to our already-battered economy and society.

And you know what makes this an even more likely and damaging prospect? Pundits and politicians and people with platforms making those of us who are grieving feel considerably worse by downplaying, dismissing or belittling our collective traumas, just to boost their own profile, or further their ideological ends in some fleeting and meaningless way.

You could argue that those responsible, and those who give them the airtime and platforms they crave, should know better. I’d contend they actually do know better, but don’t care. Because however numerous those of us who’ve lost people to Covid are, we’re not them. Ergo, we don’t matter. At least, not enough to cause the pundit class to think twice, or to hesitate, before firing off another thoughtlessly cruel missive about how the attempts to tackle to pandemic (however cack handed) are needless impositions on their own daily lives. It’s the online equivalent of angrily beeping your horn at a funeral procession because it’s delaying your journey to the pub. We’d consider such behaviour to abhorrent in the real world. It’s no more acceptable online.

The ultimate tragedy is that this sort of behaviour is ultimately self-defeating. By increasing the trauma and distress of a big chunk of the population, it’ll take even longer before society can get back to the ‘normal’ they see as their God-given right.

Not that they’ll care when there’s clicks to be generated through outrage. What is other people’s pain compared to that?

Dean Burnett’s new book, Psycho-Logical: Why Mental Health Goes Wrong – and How to Make Sense of It, is released in February, and is available for pre-order now.