Can the Teenage Brain Ever Know ‘True’ Love? – Dean Burnett 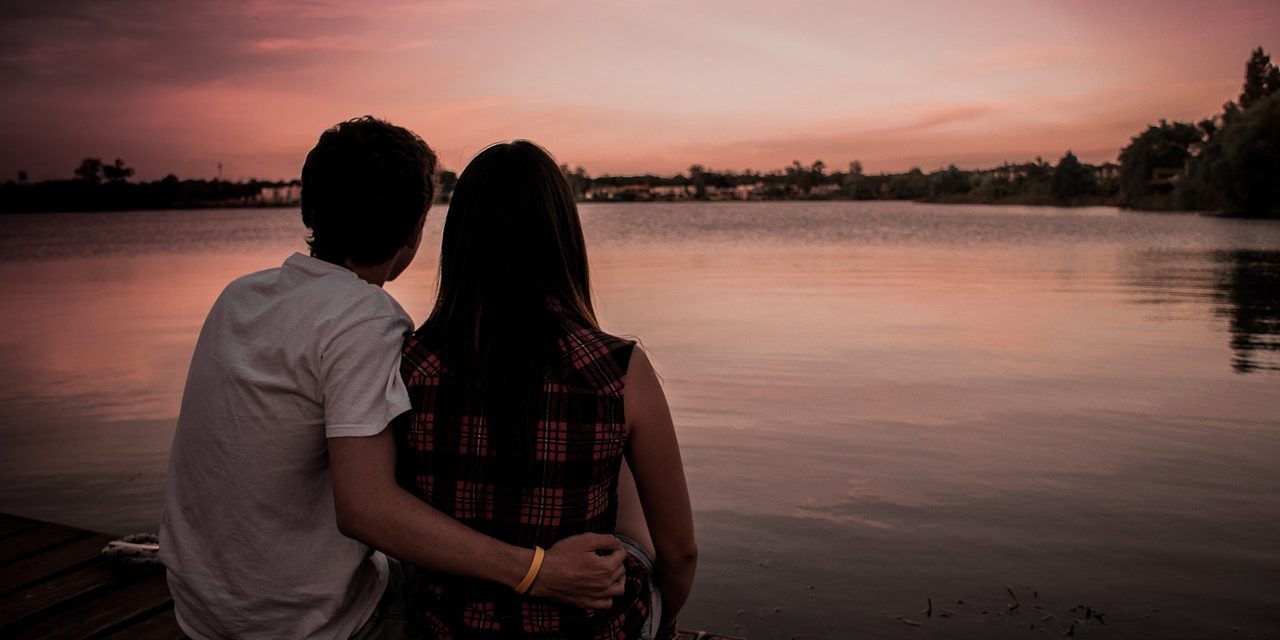 Can the Teenage Brain Ever Know 'True' Love?

A recent reddit post argued that brains that aren’t fully formed can’t know what love really is. This is, according to all evidence, nonsense. 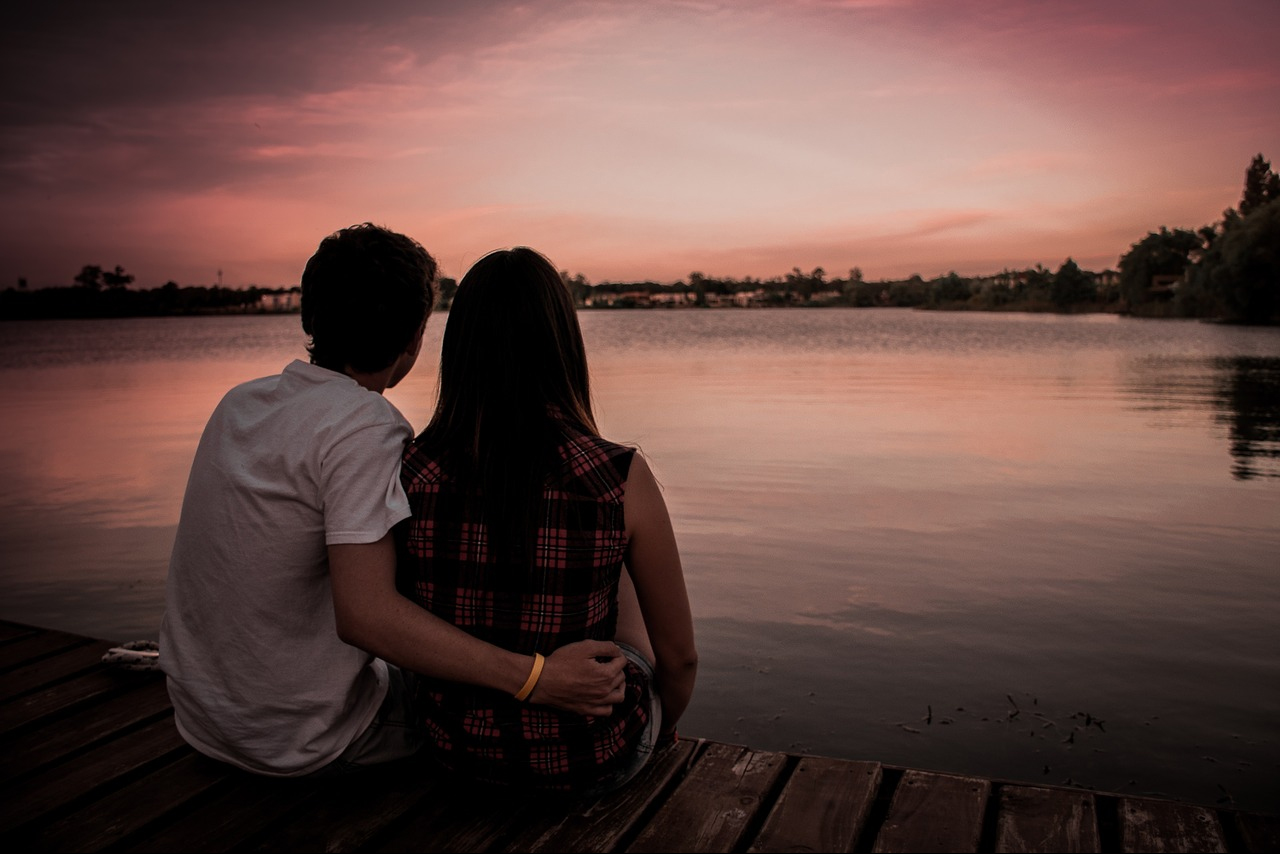 In a complete violation of Betteridge’s law, the answer to the question asked in the title of this post is “yes”. If you prefer a less succinct answer, the full response would be “Yes, of course they can, why on Earth would you think otherwise?”

But, why would anyone ask this question in the first place? It’s not something I’d ever considered myself before yesterday, but then Twitter friend @mangmangmang messaged me to get my take on a reddit relationships post centred around the notion that immature brains cannot know what love is, and presumably want you to show them, unless the band Foreigner have been lying to us all these years? 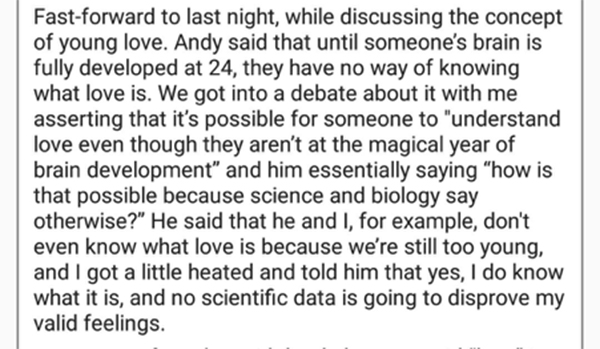 The original post involves a young woman (possibly a teenager) stating that her similarly aged boyfriend insists that until your brain is ‘fully developed’ at age 24, it’s impossible to know what love is. Said woman takes issue with this claim, and Andy doubles down and says that “science and biology” agree with him.

Ignoring the fact that Andy seems to think science and biology are different things, is he correct? If the brain finishes developing at age 24, are we unable to truly experience love (and presumably many other important sensations) until this point?

Andy does, in fairness, seem better informed than most with regards to brain development. It’s now widely accepted now that the human brain continues developing into our mid-twenties, it doesn’t stop at 18.

But, that’s where the list of things that Andy is right about comes to an end. The rest of his claims are, to use the scientific vernacular, bollocks.

The main issue with Andy’s argument is he seems to be under the impression that a brain can’t do anything ‘properly’ until it’s finished, like how a car isn’t much use until it finally rolls off the production line. This is wrong, though. The human brain doesn’t work like that at all, particularly during adolescence. For a more thorough overview of this I recommend Sarah-Jayne Blakemore’s book ‘Inventing Ourselves’ all about this very subject, but here’s a basic run down.

We absorb a terrifying amount of information in our early years, just by interacting with the world around us. But our brains aren’t meant to be a passive data sponge, at some point all this information has to be put to use. When we hit our teens, our brains are still developing, but they’re not necessarily acquiring new abilities/information. Instead, they’re sorting out what they’ve already accumulated, and making things more efficient. Adolescence is where our brains go from “What am I supposed to do?” to “I know what I’m supposed to do, how best to do it?”

Counterintuitively, during adolescence our brains lose countless synaptic connections during a process labelled ‘pruning’. Our brains have finite resources and a long lifetime ahead, so anything that’s deemed unimportant is jettisoned so energy and effort can be spent on the useful stuff. Our childhood brains may absorb everything, but we don’t need everything. It’s like clearing the pointless icons from a very cluttered desktop, allowing you to work better and find where everything useful is.

This is how our brain ‘matures’; it becomes more efficient and productive, important connections are strengthened, and so on. When this process is finished, then brain development is, essentially, done.

Now, here’s the ‘but’. The brain is not a homogenous lump, different parts perform different function in different ways, and some parts are older and ‘simpler’ than others (the ‘reptile’ brain, anyone?) Human brains have evolved some very complex and intricate processes, usually located in the prefrontal cortex, home to our so-called executive functions, the processes that allow us to consciously control what we do. These are the most cognitively demanding of the brain’s processes, and so the regions that support them take the longest time to mature. It’s largely these parts that continue developing into our twenties, not the whole brain

The same can’t be said for the more ‘basic’, instinctive processes, like the emotional impulses handled by the limbic system. Even babies can experience fear, anger, laughter, and affection, these things are key to our development. They’re very fundamental, so the brain regions that support them are older, more straightforward, and mature faster. This makes sense in a way, it presumably takes less time to build an abacus than it does a smartphone. 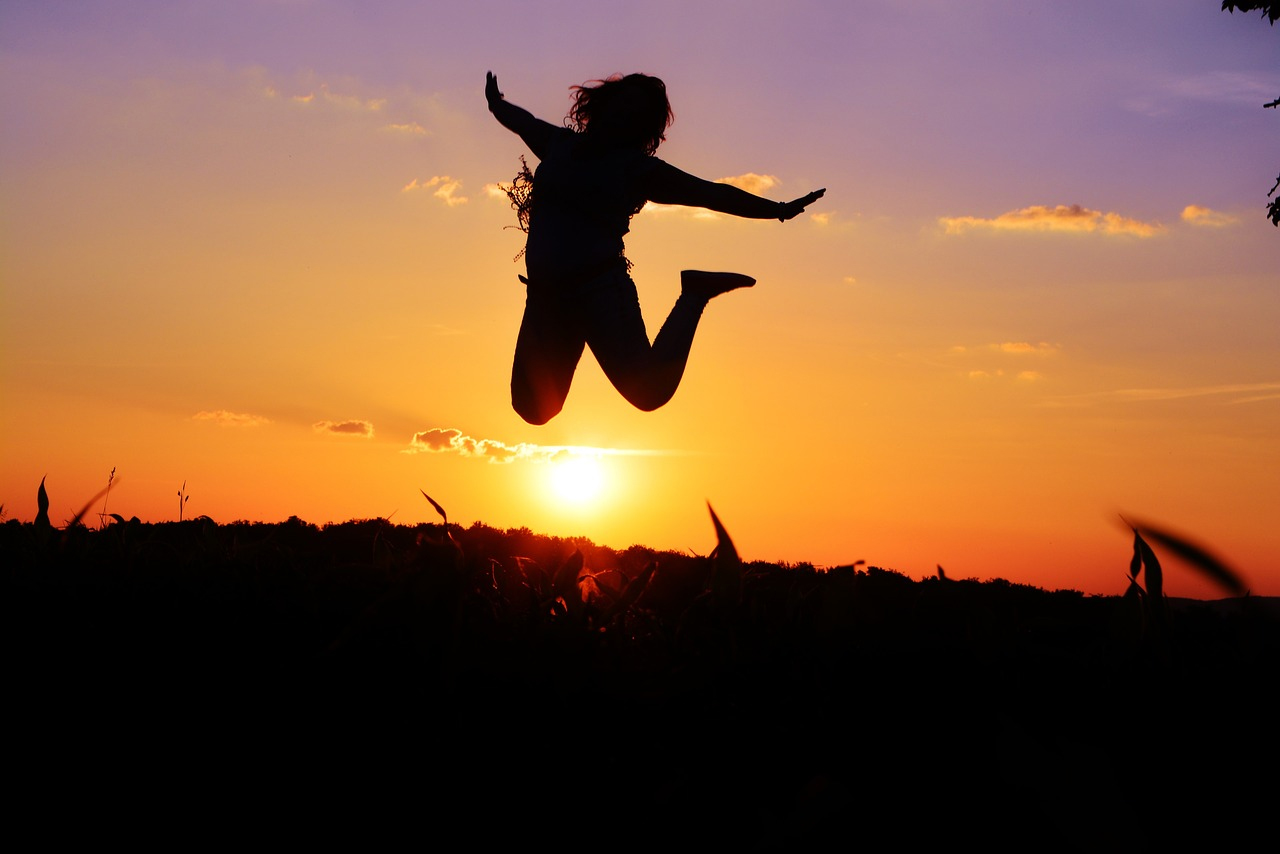 A teenager in love, or one who’s just received her A-level results? There’s no way to be sure.

Back to Andy’s argument; it’s wrong because he thinks a brain that’s still developing cannot experience love, at least not ‘real’ love. But what science (and biology) show us is that those still-developing brain regions aren’t needed to experience love, they’re actually more about controlling and inhibiting emotional drives, like love, than creating them. This uneven development is believed to be why teens are so vulnerable to emotional and sensation-seeking stimuli; the parts of their brains that process and generate these things are fully matured, the parts that inhibit them are not.

So, in essence, Andy is 100% wrong as the complete opposite of his argument is what seems to be true. A still-developing brain is less able to control or suppress the feelings or longings associated with love, but is more than able to experience them. In the wider sense, this means that teenagers are more able to experience the whole ‘to hell with it all, nothing else matters, I’ll do anything for you and you alone, I’m in agony without you’ type of love that many so often long for.

I don’t know Andy, and we only have his (presumably) girlfriend’s report of what he thinks so there’s no guarantee that it’s accurate, but assuming it is, it looks to me like Andy has latched on to a small nugget of neuroscientific knowledge, divorced from relevant context, and is using it to keep his girlfriend’s feelings at arm’s-length, or to belittle/diminish them and retain a sense of control and ill-deserved superiority.

Or maybe he’s just a pompous arse. Who knows? But according to available evidence, teenage brains are more capable of experiencing true love than the more mature kind, it’s the keeping a lid on it that they have trouble with.