Do Dreams Have An Evolutionary Purpose? – Dean Burnett 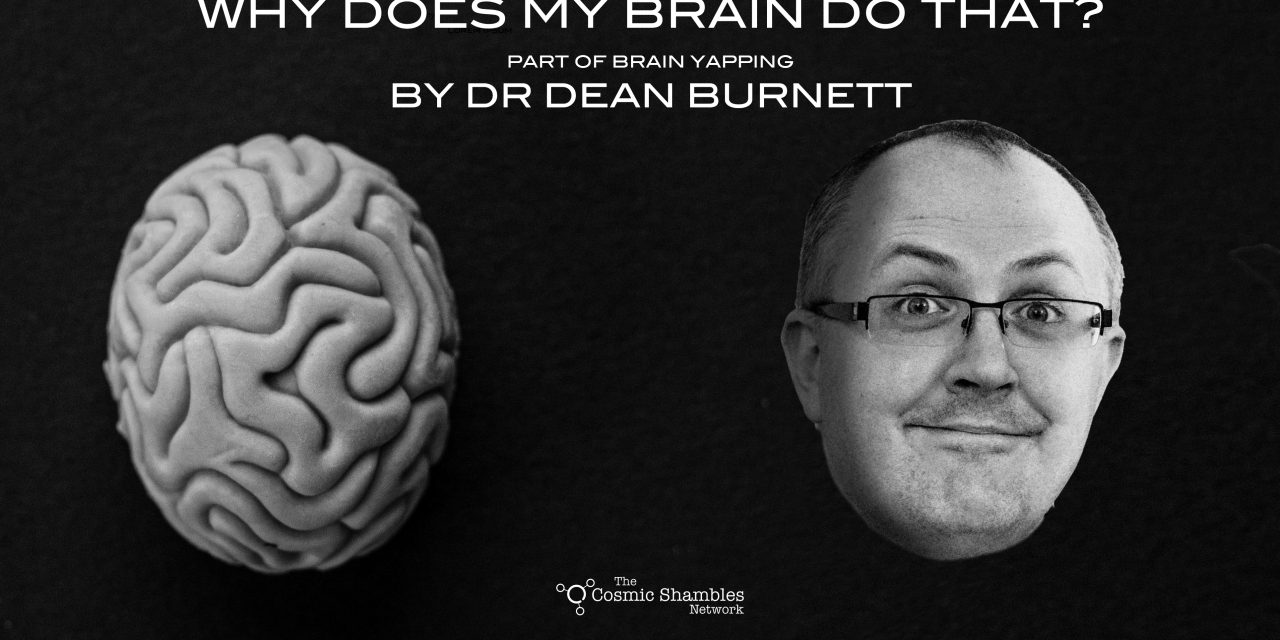 Do Dreams Have An Evolutionary Purpose?

Why Does My Brain Do That Preview

Welcome to a brand new interactive written series exclusive to The Cosmic Shambles Network, from bestselling neuroscience author Dr Dean Burnett, where Shambles Patreon subscribers get to drive the stories. 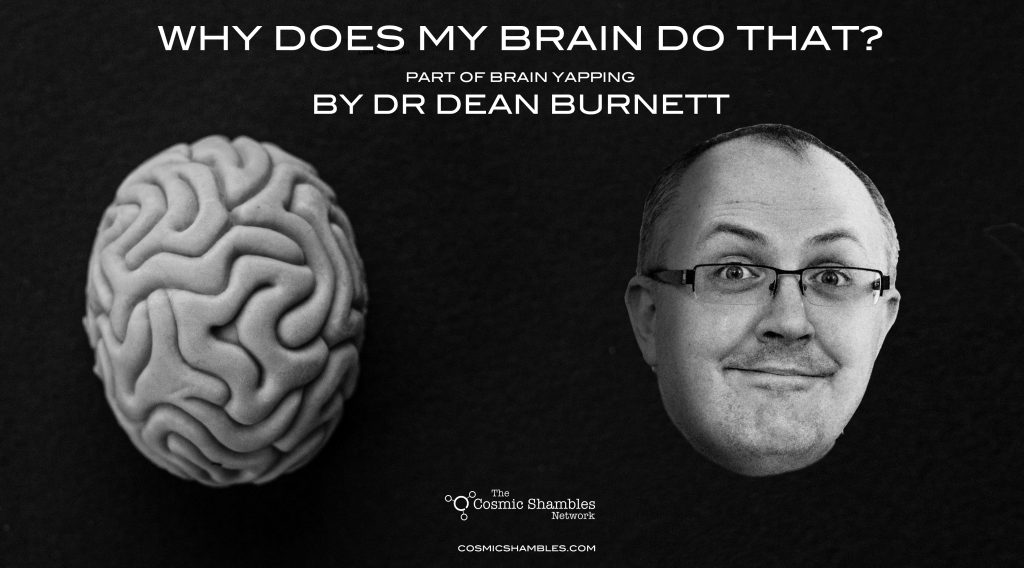 Ever gone into another room then immediately forgotten why you did so?

Ever had a song go round and round your head for days on end, even though you HATE it?

Come to think of it, why do you end up viscerally hating a harmless song in the first place?

Ever been palpably scared of a children’s cartoon?

Ever had one of your limbs or appendages just not do what you told it to?

Ever been unable to remember someone’s name, even though you’ve met them countless times and are looking right at them?

If you answered yes to any of these questions, or even ALL of them, don’t panic. You’re far from alone. Weird as it may be, these things happen to pretty much everyone, all the time?

You can trust Dean on this. Having spent over 2 decades immersed in the world of neuroscience, psychology, mental health, and science writing, few people can claim to be as well versed as he when it comes to the many ways in which our brains regularly backfire.

Indeed, about 90% of his written work, and all of his books, could be described as some variation on ‘You know how your brain does bizarre things? Here’s why that happens.”

Dean has often said that one of the most common, and rewarding, responses to the things he writes, is people coming up to him and saying “I always wondered why my brain was doing that, and now I know!”

So, why not lean into that? That’s the plan for this new series from Shambles. Rather than leave it to chance, we’re giving real people the chance to directly ask an expert why their brain does a particular weird thing, and Dean will answer it as best as he can, using actual neuroscience and references.

So, if you want some answers about what your brain is up to from what’s essentially a neurological agony aunt, subscribe to our Patreon here.

Every fortnight we’ll publish a new, original feature article from Dean on the site doing what what he can to help. The articles will be free for all but the questions will come exclusively from you wonderful Patreons.

Author’s note: this piece is intended as a sample of the sort of thing this series should look like. The question is a holdover from one of the Cosmic Shambles live shows that occurred online weekly during the pandemic. Future submissions and questions may well be more personal, long winded, elaborate, etc.

Question: ‘Is there an actual evolutionary benefit to dreaming, or is it just a side effect of having a brain?’

Answer: That’s an interesting way of phrasing this question. Technically, literally everything humans do, think, or experience, could be described as ‘a side effect of having a brain’. Sort of like how eating, bathing, sleeping, and staying warm are all ‘side effects of having a house’.

Obviously, I’m being facetious, purely for my own amusement. I get what the question is actually asking; does the act/experience of dreaming have some form of direct benefit or role, or is it more just an unintended consequence of other important stuff happening in our sleeping brain?

There’s a lot of research into this matter. Ironically, I feel; people are very interested in dreams, but you try and tell them about your specific dream and their eyes immediately glaze over. But that’s an issue for another day.

In a nutshell, the answer is that yes, dreams do have an important function for our brains, one linked to memory consolidation and emotional processing.

Before I go any further, it’s worth flagging up that, as with most things neurological, not everyone agrees with this. I’ve encountered those who believe that dreams are indeed, as the questioner suggests, a mere side effect of other active processes in the unconscious brain.

As many will know, your brain is practically as active during sleep as while you’re awake. But neurological processes consume a lot of energy, and given how no biological organ is 100% efficient (because physics), the energy not used in the important processes must go somewhere.

When we’re awake there many options and outlets, but when we’re asleep and physically ‘inert’, this excess neurological energy, having fewer routes, ends up being channelled into generating random activity in neurons. And some of those will be memory engrams and related cells, activating them largely at random. And that, according to some, is why we dream, and why dreams are so random. They’re basically the belching of our sleeping brain.

It’s an interesting/amusing idea, but most research suggests a somewhat more dignified function.

It’s important to be aware that countless elements of the working brain are multifunctional; the same bit can do numerous different things. The amygdala, for instance, is involved in the experience of fear and stress, and also encoding emotions into memories, and also assigning the correct emotional response to a specific context, and more.

Similarly, the neurological processes that encode and retrieve memories are seemingly a key part of processing and managing them in your brain. Which makes sense. But this also means that in order to process memories, we end up reactivating, and thus reexperiencing, them. And as a lot of memory processing and consolidation happens when we’re asleep (when our brain doesn’t have a sensory bombardment and countless new memories to deal with), we end up dreaming.

You could still argue that this still suggests dreams are a ‘side effect’ of memory processing, but thanks to how our brain works, the ‘re-experiencing’ of the memories, i.e., dreams, is an essential part of the process. 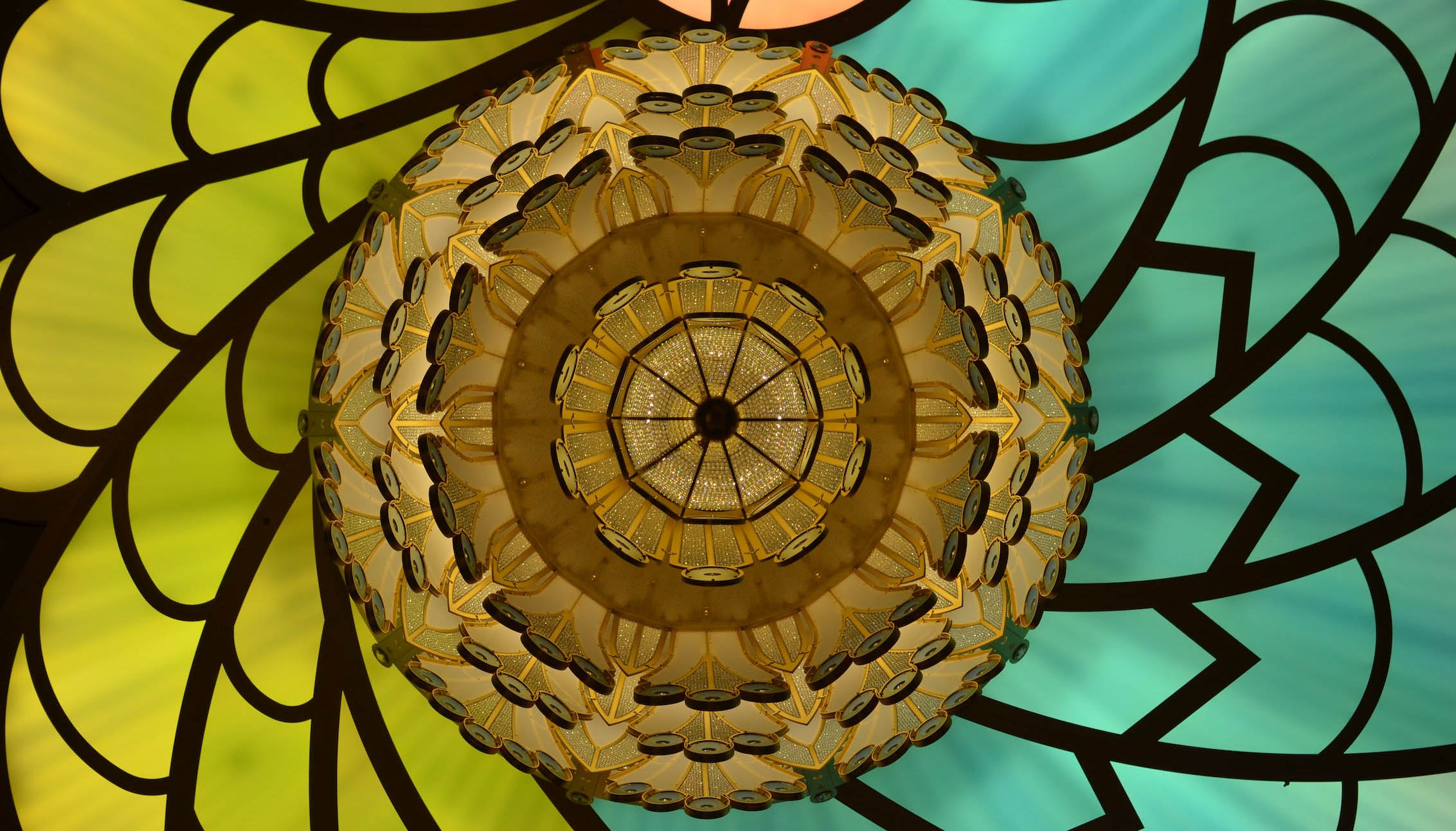 This means you have a tricky relationship with your mother. Or that you need to switch to skimmed milk. Prove me wrong!

Also, you know those ludicrous claims people make about being able to “interpret” your dreams, which inevitably boil down to basic life advice, often dispensed by someone wearing an excessive amount of silk and beads? Well, as teeth grindingly frustrating as it is to admit, there may be some credibility to such claims. Although nowhere near as what’s often said.

Evidence to suggests that what we dream is a manifestation of the emotional experiences we have during the day, particularly those that persist and trouble us, even at a level we’re not consciously aware of.

The uptick in weird and unsettling dreams during the pandemic is a matter of record. But, given all I’ve said, is it so shocking that countless millions of people experiencing a significant increase in daily stress would lead to a similar increase in the number of bad dreams?

All that extra emotional stress needs processing by our brains, and dreams are where this happens.

There are also many theories/arguments as to why dreams are so weird and random, and why experiencing persistent work stress leads to recurring dreams about your teeth falling out, but again, that’s for another day.

Finally, some theorise that dreams have even more direct and important functions. Research into nightmares specifically leads some to argue that they occur to simulate threats. Our brains create these intensely fearful emotional experiences while asleep so as to practice dealing with such things in the real world, meaning we’re able to handle them better, and thus survive them.

Conversely, there’s also data revealing that nightmare occurrence is a reliable indicator of mental health issues. If nightmares are helpful in maintaining mental wellbeing, why would they be more frequent when it’s declining?

Unless it’s our brain getting desperate? Creating more nightmares in an attempt to stave off the underlying stress and disruption, like a man frantically bailing the water from a sinking boat.

Ultimately, while it may be easier, and more amusing, to write dreams off as just an elaborate series of brain farts, there’s much enough evidence to argue that they do have a directly useful, maybe even essential, role to play in the sleeping brain.

Will we eventually get to the bottom of this question once and for all? We can but dream.

Dean Burnett covers this subject and more in his brand new book, Emotional Ignorance: Lost and Found in the Science of Emotion.