All in the Family? – Brenna Hassett 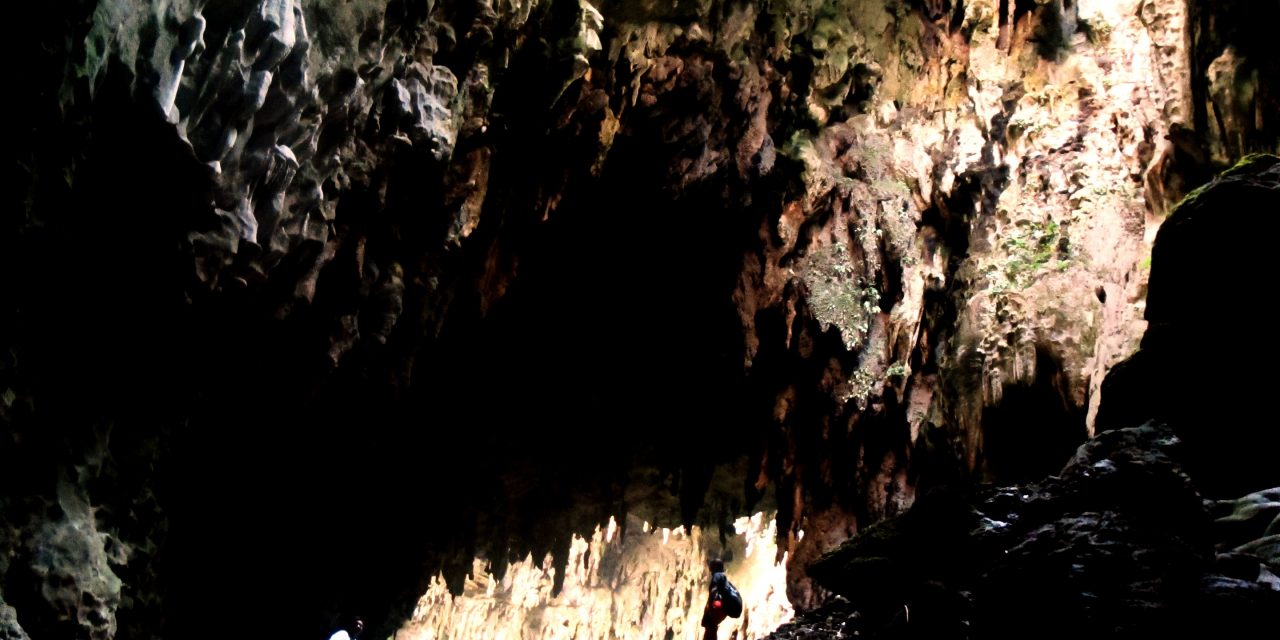 All in the Family?

How are hobbits like buses? Well, you wait for one for ages then a bunch show up all at once… 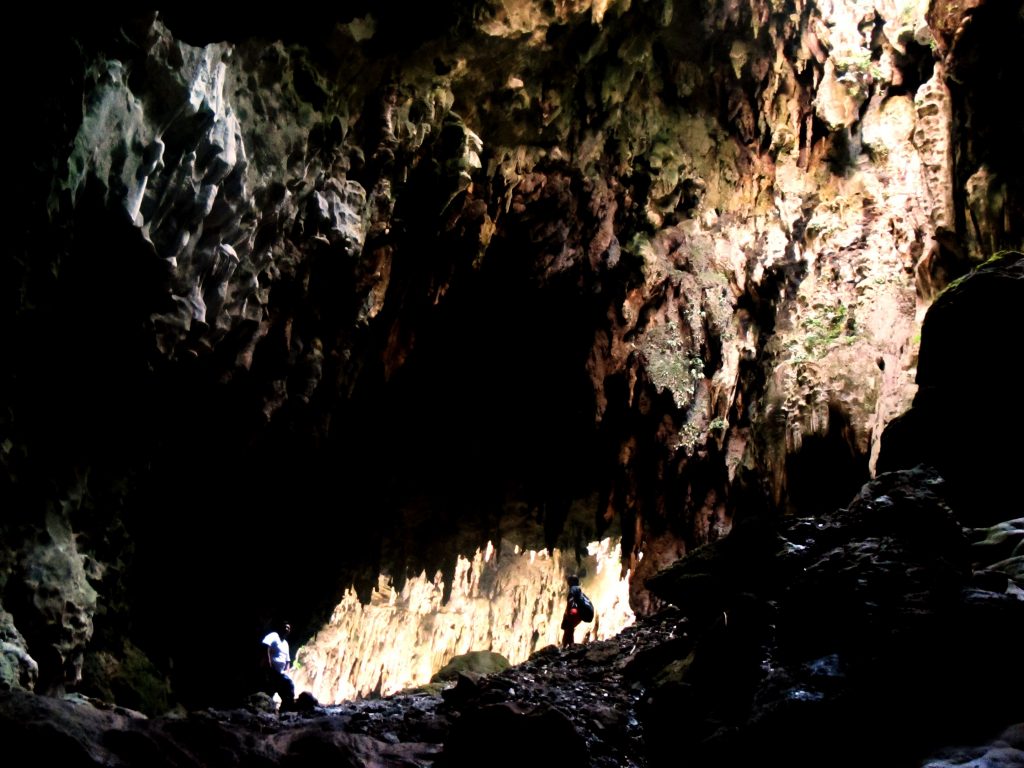 Callao Cave, where the new discovery was, well, discovered.

On Wednesday, an international team of scientists published a startling new discovery in the journal Nature. An entirely new species of hominid had been identified in the North Luzon region of the Philippines: Homo luzonensis, a teensy hominid that’s a mixed bag of primitive (think older, further back down the family tree) and derived (think out towards the tip of the evolutionary tree branch) traits. Researchers have meticulously poured over the small fragments of tooth and bone for more than a decade and finally come to the conclusion that what they found constitutes an actual new species: the kind of thrilling, once-in-a-lifetime event for any digger-up of dead things. Cue the fireworks, right? 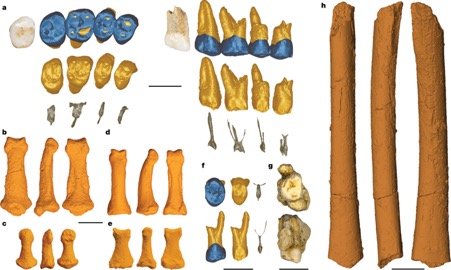 Tooth and bone fragments used to identify the three individuals who, so far, make up the entirety of Homo luzonensis. The teeth show primitive traits like multiple roots on the premolars but more derived, modern-human-like traits in the small, simple molars. From Detroit et al, 2019; https://www-nature-com.libproxy.ucl.ac.uk/articles/s41586-019-1067-9/figures/2

But wait! You say. I only just got over the excitement of Homo naledi! And I spent ages being totally tripped out (and infringing copyright law) when Homo floresiensis made its totally-not-reminiscent-of-a-certain-fantasy-species world debut! Plus I’m still not super clear on why everyone is suddenly okay with being a little bit Neanderthal, and I did not expect those Denisovans. What’s going on here?

It’s an important question. Are we experiencing a renaissance of paleoanthropology, finally exploring new corners of the world? Are species that were right under our noses (well, locked away in specimen drawers) suddenly blindingly obvious under the bright and shining light of powerful new techniques like ancient DNA analysis? Or are we going through a bit of a Judean People’s Front/ People’s Front of Judea type of phase – we’re all splitters now, but in a decade’s time, we’ll be back to lumping everyone together?

It’s a big question, and because this is an archaeology blog,[1] the first thing to do is to put these new discoveries in context. 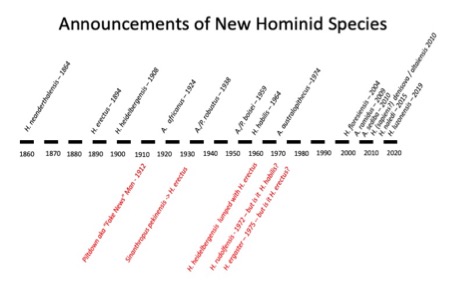 The rate at which we have been digging up dead relatives over the last 100+ years. Debated species below the line, though H. heidelbergensis is mostly accepted as a species again. For now.

Okay, so we do seem to be ramping up our fossil finds. It seems unlikely too many of these finds are due to exploring new corners of the world – after all, we have known about fossil hominids from South Africa for almost a hundred years, and our man in Java was discovered when Queen Victoria was still on the throne. It is tempting to blame Lee Berger, who keeps stumbling over new species, but he turns out to be just a fortunate scientist rather than some sort of mystic-powered hominid-whisperer. Probably.

So, are we finding more species now because we have this whizz-bang new ancient DNA thing? We wouldn’t know about the Denisovans, the enigmatic group from the Altai that left traces of their DNA in us and in Neanderthals, without DNA analysis. We certainly wouldn’t have ever expected to find evidence of a first-generation hybrid. But those same hybridization events trigger new questions for some: if Neanderthals, Denisovans, and anatomically modern H. sapiens could interbreed, are they really biologically separate species? 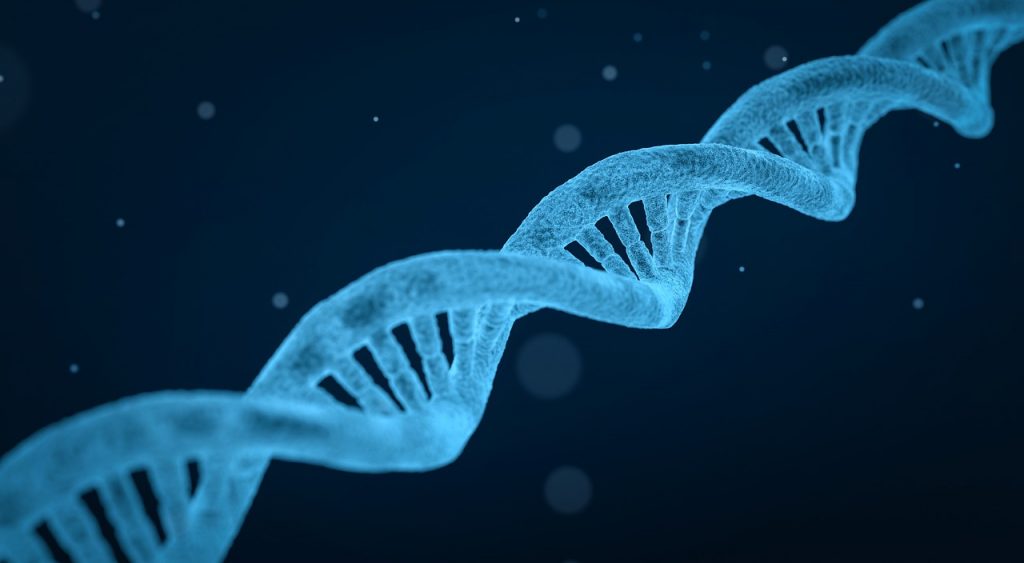 It’s interesting to note that the 1970’s, a time of crooked world leaders, oil crises, and unfortunate choices in home décor, was probably the last time we got so excited about announcing new species. That sudden florescence was pretty rapidly followed by all those new species being collapsed down into the few recognisable categories we’ve used since. We lost Zinjanthropus (now Australopithecus and/or Paranthropus, mostly), which is a shame for the joy of pronouncing the name alone; pretty much everything turned out to be Homo erectus.[2] The last decade or so has thrown up so many gorgeous, engaging, exciting surprises it has forced paleoanthropologists to revisit things we used to think were settled. It turns out we don’t know how many hominids might have been roaming the earth at any given time; how they *cough* interacted; or whether their *cough* interactions had lasting impacts on relatives like us. It might be that in another ten years we get sick of remembering all those names, and start collapsing some of these new species into old categories, but for now, let’s enjoy the thrill of discovery, and some ace fossil teeth.

Resources:
https://australianmuseum.net.au/learn/science/human-evolution/a-timeline-of-fossil-discoveries/
[1] Yeah, yeah.
[2] Not you, heidelbergensis. I believe in you.
Feature Photo Credit: https://commons.wikimedia.org/wiki/User:Schadow1