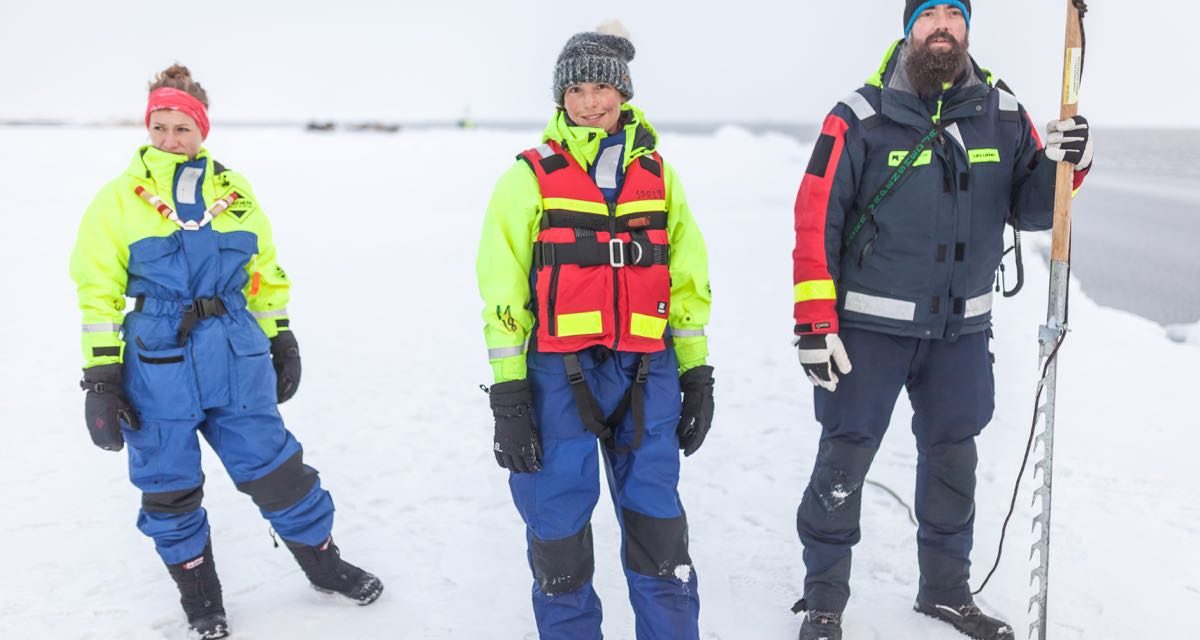 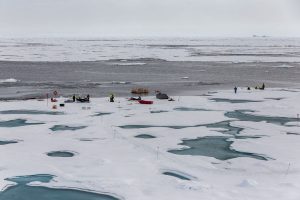 We have just passed the halfway point of the expedition (day 28 of 56) and we’ve also now had two full weeks of drifting with this ice floe.   The tapestry of life on Oden has developed a stable shape, and our floating steel village has become home.   Shifting from task to task across the seven decks, we weave under and over each other in our physical space, sometimes pausing when we overlap, forming a new link in the fabric each time we share a part of our lives. There is a type of contentment that hits me sometimes on this ship, something which I rarely experience at home. It’s a feeling that everything is in the right place, that I’m comfortable with where it is, a feeling that I can almost wallow in the trust I have for the people around me here.  Perhaps it’s because the daily tasks are well-defined and I can finish them, even if it’s physically challenging, in stark contrast to my London life where there are loose ends and complications everywhere.

There’s still texture to life, though.  On Saturday we marked halfway with the Swedish celebration of kräftskiva, an extremely enthusiastic fanfare for the crayfish.   The dedication of all the Swedish scientists and crew to both schnapps and singing throughout the whole meal was impressive, particularly the song sheet so that we could all join in.  There was a minor panic among the British contingent as it became clear that every country present was supposed to contribute a drinking song, because none of us could think of one.  To our relief, one of the Germans suggested “What shall we do with the drunken sailor?”, although I can’t honestly remember ever hearing that sung in a pub.  But it did the job. 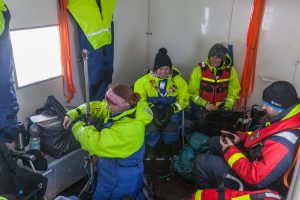 The following day was warm and calm out at the open lead, and we had an extremely happy day, giggling our way through the various jobs to be done.  The in-jokes are multiplying very quickly, gluing the team together as we manoeuvre large floating experiments, hoick instruments in and out of the water, set out mooring lines, deal with snow and ice and cold, and manhandle batteries that seem to get heavier every day (mostly a huge collection of 20 kg and 50 kg lead-acid batteries that are superstars in the cold, but horrid to move).

We don’t often stop for breaks, but our little hut (which never gets above 2°C but still seems cosy) is a happy place, and a good incubator for laughter.

The day after that, the pendulum swung back the other way.  I discovered when we arrived at the lead that my bubble camera wasn’t working properly, John’s kit had blown a load of fuses, it was warm (just above 0°C) so everything was slushy and wet, and it was generally a frustrating and subdued seven hours. It was our 13th consecutive day out on the ice, and suddenly we noticed how tired we were.  Even Matt, the cheeriest and most optimistic of all of us, had to admit in the evening meeting that it had been a “mixed” day.

It’s all held together by teamwork and trust, and this is the point in the expedition where that really starts to matter.   There is no escape and we are very limited in what we have here, but human nature seems to rise above that, finding and creating variety and laughter out of what seems like very little.   But it’s so much more human than city life often is – we have to make this work, so we do.  In a city, it feels as though you can make things better by going somewhere else, by choosing something else, by looking outward for solutions.  Here, we have to take responsibility ourselves and everyone automatically works harder at supporting the community, so we do better. 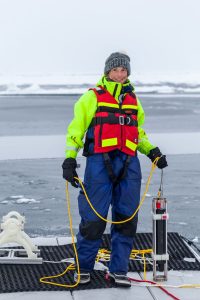 And yet.  I’ve started to notice in the past couple of days that the tiny acts of rebellion are creeping in, at least for me.  I’m missing the odd meal (and making up for it with snacks later), sometimes deliberately isolating myself from everyone else once in a while, changing my work patterns to something counter-intuitive just because I can.  In the past, the longest I’ve been at sea for has been six weeks.  The trick to this game is to turn up ready to live on the ship, not just to work on it, and I haven’t really done that.  The past two weeks have been hard continuous work, and that’s only just starting to ease off.

So now the question comes: how do I want to live on Oden for the next four weeks?  I’m not short of work to do, but from now on I’ll have more control over my time, and I should make sure that I don’t just work.   From the outside, I think that the interesting period starts now.  What is this petri dish of humanity going to do with itself as the sun starts to set and the cold arrives in earnest?    We shall see.

All photos taken by Mario Hoppmann.