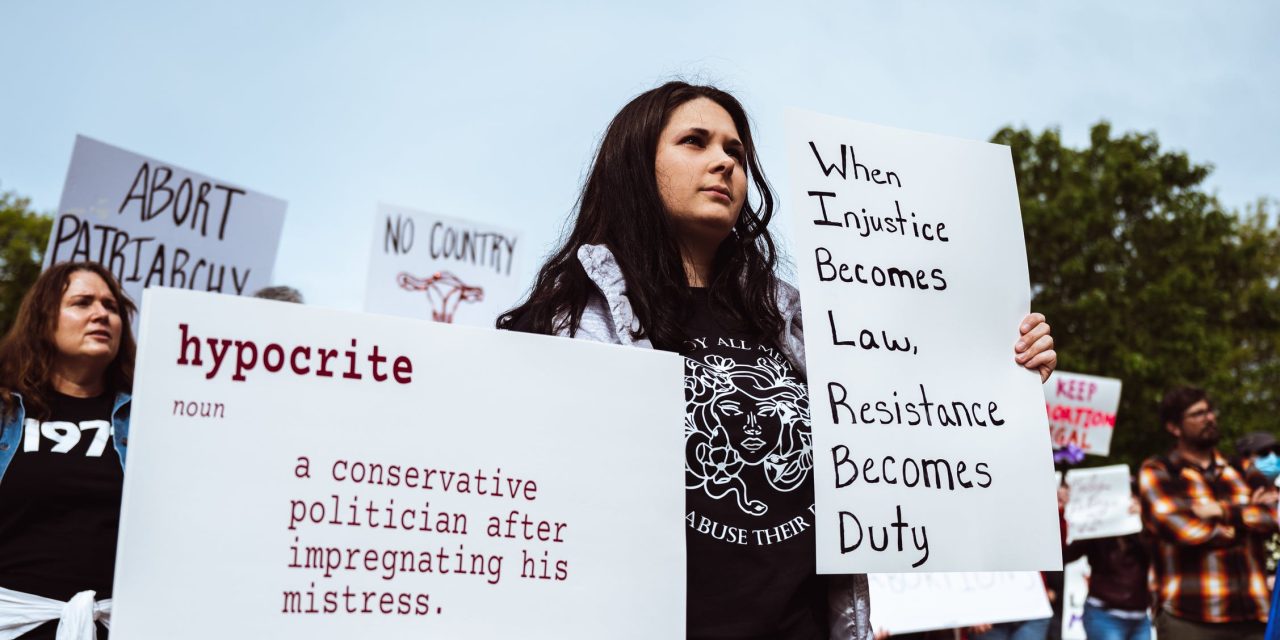 Road Movie America with a Side of JG Ballard’s Autoerotica

We fell asleep with the hope of positive political change after some of the English public made it clear that the incompetence, venality and criminality of the current government was something they could no longer stomach. 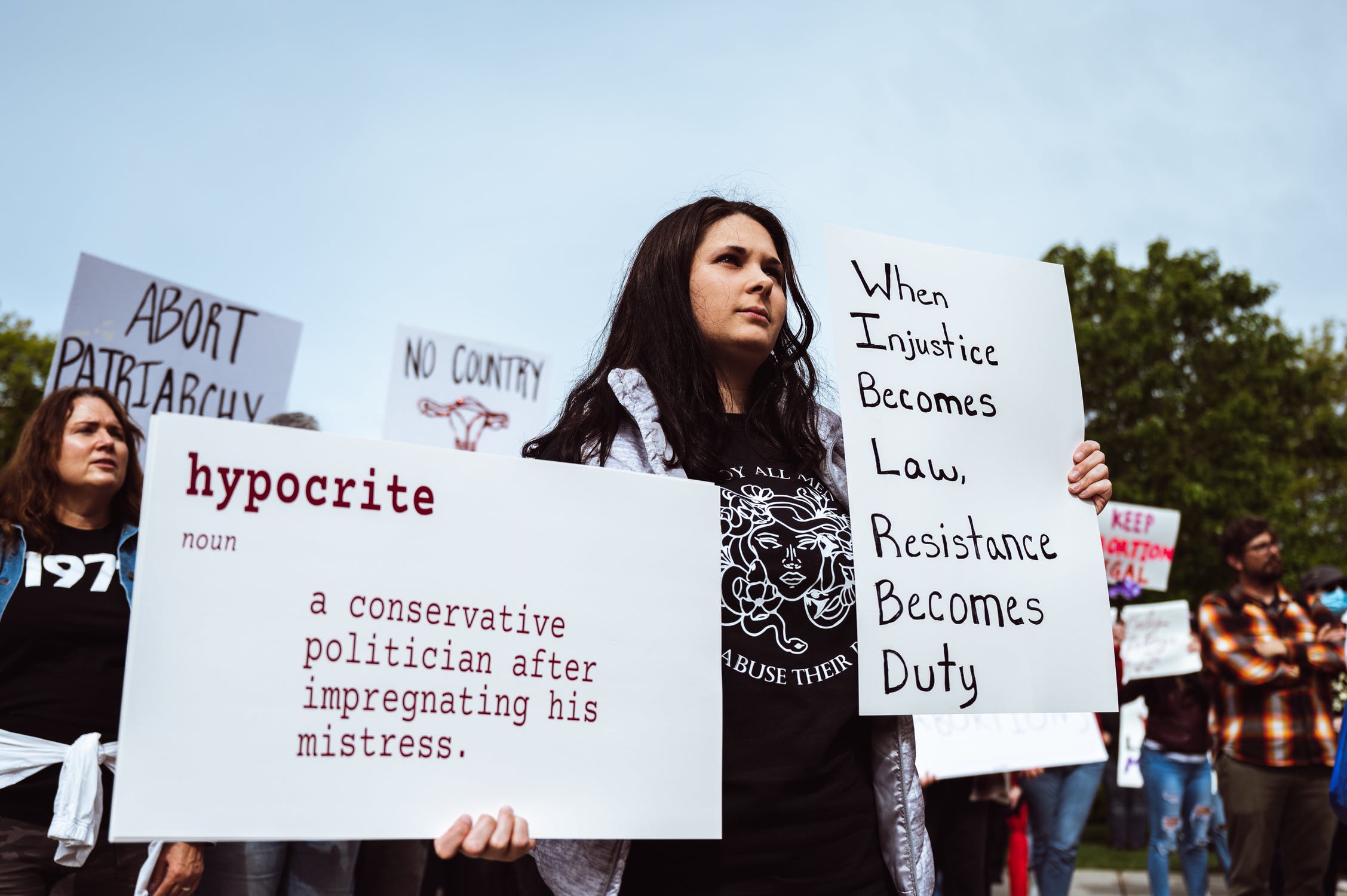 Sadly, we then woke up up in country where the constitutional right to abortion had been repealed. This bodes not seem to be “the will of the people” looking at polls and, indeed, looking at the fact that the Republicans have control of the Supreme Court despite their failure to have a majority of voters. The system seems very broken and to witness such regression is nauseating. While Trump may not be in power, the toxic influence of the inflammatory right remains dominant and cruel. Perhaps if all women become part gun the Supreme Court may feel they were worthy of gaining rights rather than having them taken away.

There are so many incisive reactions that highlight the ethical absurdity.

Jocelyn Nicole Johnson, author of My Monticello said, “SCOTUS overturned Roe and with it, the ability for girls and women to have more control over our reproductive lives and in some cases, to live at all. I feel bereft. Do you?”

And Pragya Agarwal tweeted, “I had an abortion. Women need autonomy over their bodies. This is a huge step back but we have overcome more. The fight isn’t over. Now is the time to stand for the rights of all minority groups, everyone who has ever been told that their bodies and minds are not their own.”

Later in the day, as I walk through Austin, I see groups of women on scooters, speeding down the avenues with “Fuck the Patriarchy” signs in hand.

We left Dallas at 11am. We had intended to go to Dealey Plaza, sight of the murder of John F Kennedy, but about halfway through our breakfast granola, we knew we wouldn’t make it.

The freeways of Texas are wide, and the verges ornamental as we depart the city. This is road movie America with a side of JG Ballard’s autoerotica. Concrete bridges are curved and faced above us and around us. All this traveling down freeways at high speed has given humans the impression we are actually going somewhere.

There are plenty of billboards for attorneys.

The law can definitely be an ass here.

There are many churches and chapels, some more incongruous than others.

The Full of faith Christian Centre looks like a tin shack that sells booze but has a steeple stuck on top to show this is a venue for seeking forgiveness after inebriation (or possibly during).

There are plenty of pro life billboards too.

There are none for gun control

“Love schoolchildren – my heartbeat started at 18 days and ended at five years with a bullet” might be my first draft at the ad agency.

David Byrne is singing Road to Nowhere in my head.

About once a mile there is burnt rubber and an explosion of rubber tyre at the roadside.

Later, there also seems to be the remains of a wardrobe thrown from a truck as pink blouses flutter on concrete as trucks speed by.

I slept badly, so slip into a state that is neither asleep nor awake, but twilight minded, experiencing a flick book of crepuscular hypnogogic visions 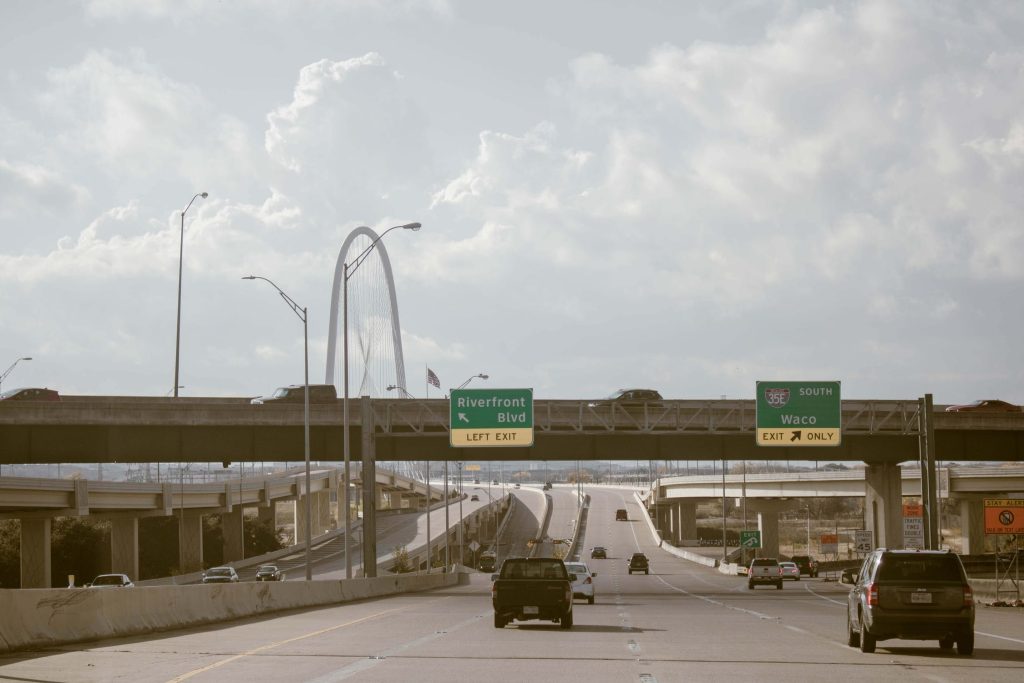 We pass Waco. The siege of the Branch Davidians and its tragic conclusion seems like a major part of the origin story of the 21st century conspiracy theorist, the manifesto that it is you and your guns against the government and the elite.

Steph and Brain need a rest stop, so we pull in at a Circle K just after the “Make Texas a Country Again” billboard. A jolly man buys his gasoline and orders “a piece of that stale pizza over there”, and everyone laughs together.

Further on, there is a field with a Honey Bucket portaloo in it, as names for portaloo companies go, I’m not that keen, but I am sure the honey arsed are fine with it.

The Baylor University tower as we approach Austin reminds me of Rick Roderick, a Texan philosophy lecturer whose Self Under Siege series on Habermass, Foucault and Heidegger has brought me great joy. “Now Heidegger was a Nazi. I don’t like starting with that snotty remark, but it’s true”

I don’t know what the Inner Space Cavern is but its billboard with a mammoth on makes me want to know more.

Driving into the city I see that Sam Elliot is painted on a Gulf garage wall.

I make notes of where I will have to walk later, the Museum of the Weird will be a necessary destination.

Brian goes to write his book on black holes, which means he is going for a nap, and I walk to South Congress Books. Within 15 minutes of the heat, my eyeballs are more salt than water.

The roadside signs are different now. Austin Motel has a clearly Freudian sign. Actually, it is barely Freudian, they must have known it looked like a penis – “So Close Yet So Far out”. The bar next door promises Bobs Burlesque Bingo”. 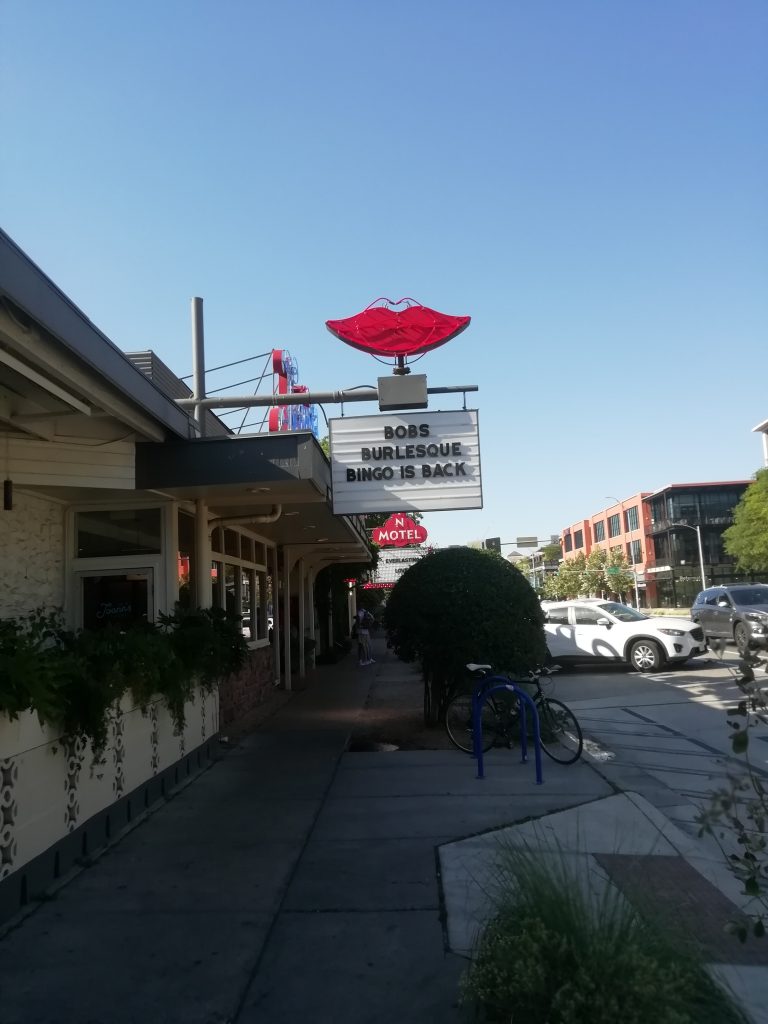 I drip in South Congress Books, a store of very high quality publications and I spend too much. I cannot resist a signed first edition of Harlan Ellison’s Shatterday at $100. My biggest expense of the tour – a moment of heat-stroke madness perhaps. I also buy Gilbert Hernandez;s The Troublemakers and Jacques Bergier’s Secret Doors of The Earth – “There may be secret doors of the Earth, phenomenal passageways to other worlds within the visible Earth. Extraordinary Beings as old as the planet….” Here we go, down and down into a hollow Earth…. 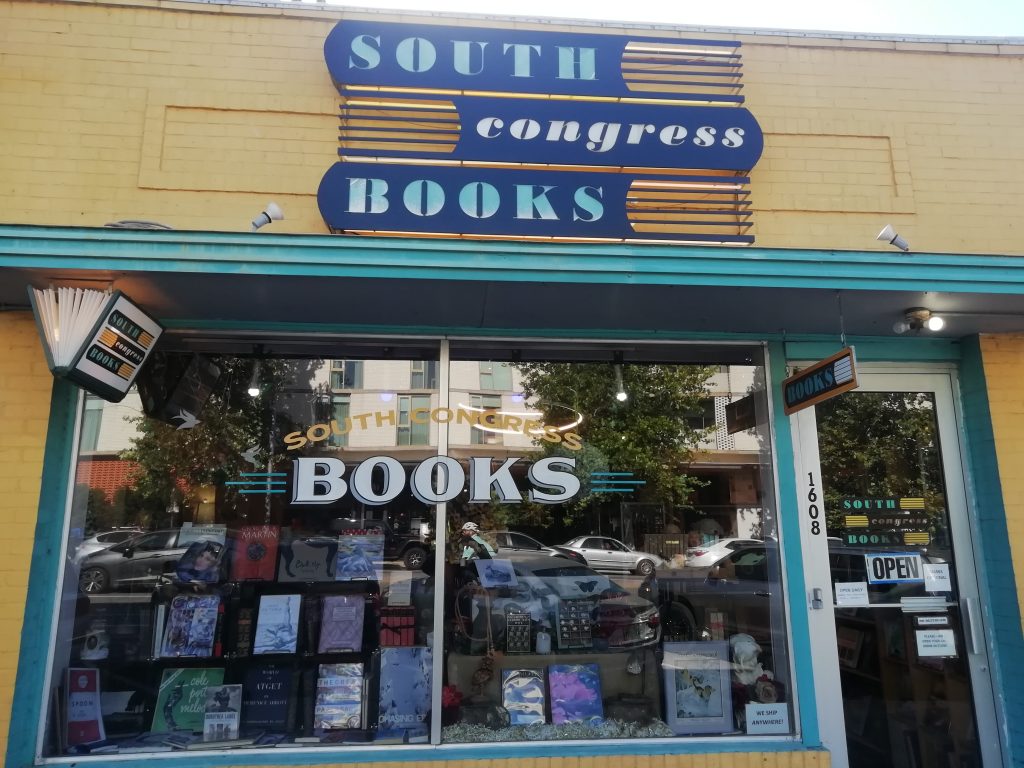 There is a small change to the show tonight which means that the show is shorter, sharper and better. Three dates to go on the US tour and we have almost got it right.

Brian is pleased that there is a photo of Bernadette Peters in his dressing room.

After the show, I meet the mathematicians in the audience.

We go for an end of tour drink as we won’t have time for one at the end of the tour. We leave the crew at 1am, apparently they are still drinking and talking about road cases and amplification at 3am.

Is life an inevitable consequence of the laws that govern our universe? Or could our universe have existed without life?

What is the biggest astrological threat to life on Earth?

Would you eat the moon if it was made of barbecue spare ribs?