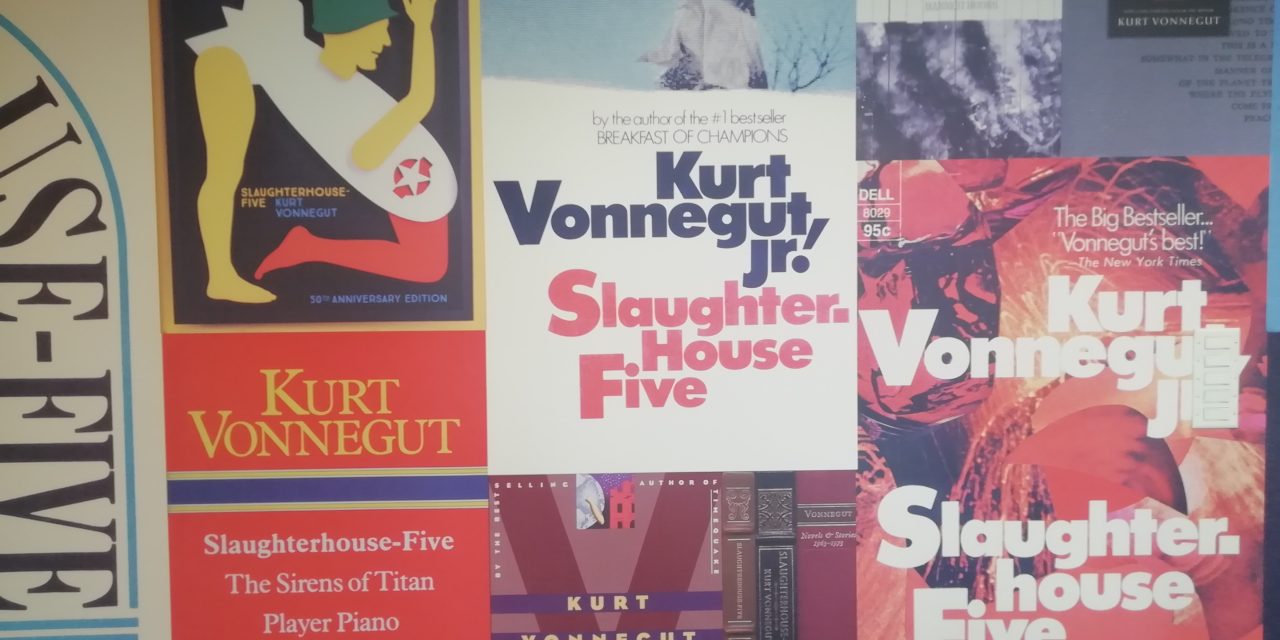 A Day With Kurt Vonnegut in Indianapolis

This morning, I was playing bass for Nick Cave and Warren Ellis. It was a small gig, but it went well.

After the gig, Nick went off with someone to discuss grief and I told Warren how happy The Dirty Three made m when I watched them live. I nearly said something negative about Conor Oberst who followed them once and brought a very negative atmosphere with him to the stage, but I decided to stay positive. Then, it seems there was some issues with roads crumbling before our eyes. I presume I was rewarded this dream to make up for the Nick Cave exhibition in Montreal being closed on the day I was there. I woke up disappointed that I was neither friends with Warren Ellis nor could I play the bass guitar. (Note – Both the dream and the writing of this occurred before I saw the news of Nick Cave losing his son Jethro. I hope it is not insensitive to keep this first paragraph).

It is a flat journey to Indianapolis and with surprisingly few billboards of note. One advises that Jesus is The Answer at the same time as informing us that Scott Door Services are for all your door needs. I am not sure if it is a billboard that only got halfway through transition or whether the door services are actually Jehovah’s Witnesses.

I am in a distracted mood, flitting about from half thought to half thought in a vaguely hypnogogic manner. There is a conversation about the belly button altering nature of pregnancy and how you can end up with one that looks like a cat’s bottom.

Scrolling through Twitter as we pass another barn, I see a tweet from Natasha Devon – “Any1 else find their body lets them know before their brain when they’re struggling psychologically?”

I find it remarkable that I have spent so much of my life believing I was anxious because my body felt weird or I suddenly needed to go to the toilet or something else with potential for public shame when actually this was primarily how my anxiety made its presence known. Does the body rule the mind or the mind rule body? Like spacetime, the separation seems ultimately impossible.

A billboard announces warm Glow Candle Outlet. It promises it does much more, including gnomes. Eventually, we approach the outlet. I am impressed by the size of big candle that declares its existence, it is the nearest I will get to seeing The Giant Pineapple on this tour.

We don’t have long in Indianapolis and I have one key destination – The Vonnegut Library and Museum. I turn the corner onto Indiana Avenue at a large jazz mural. As I will find out in the museum, jazz is important to Indianapolis. The museum is working on the funding for a documentary on Wes Montgomery to be released in 2023, the centenary of his birth. Montgomery was a pioneering jazz guitarist who would pluck the strings with side of his thumb. 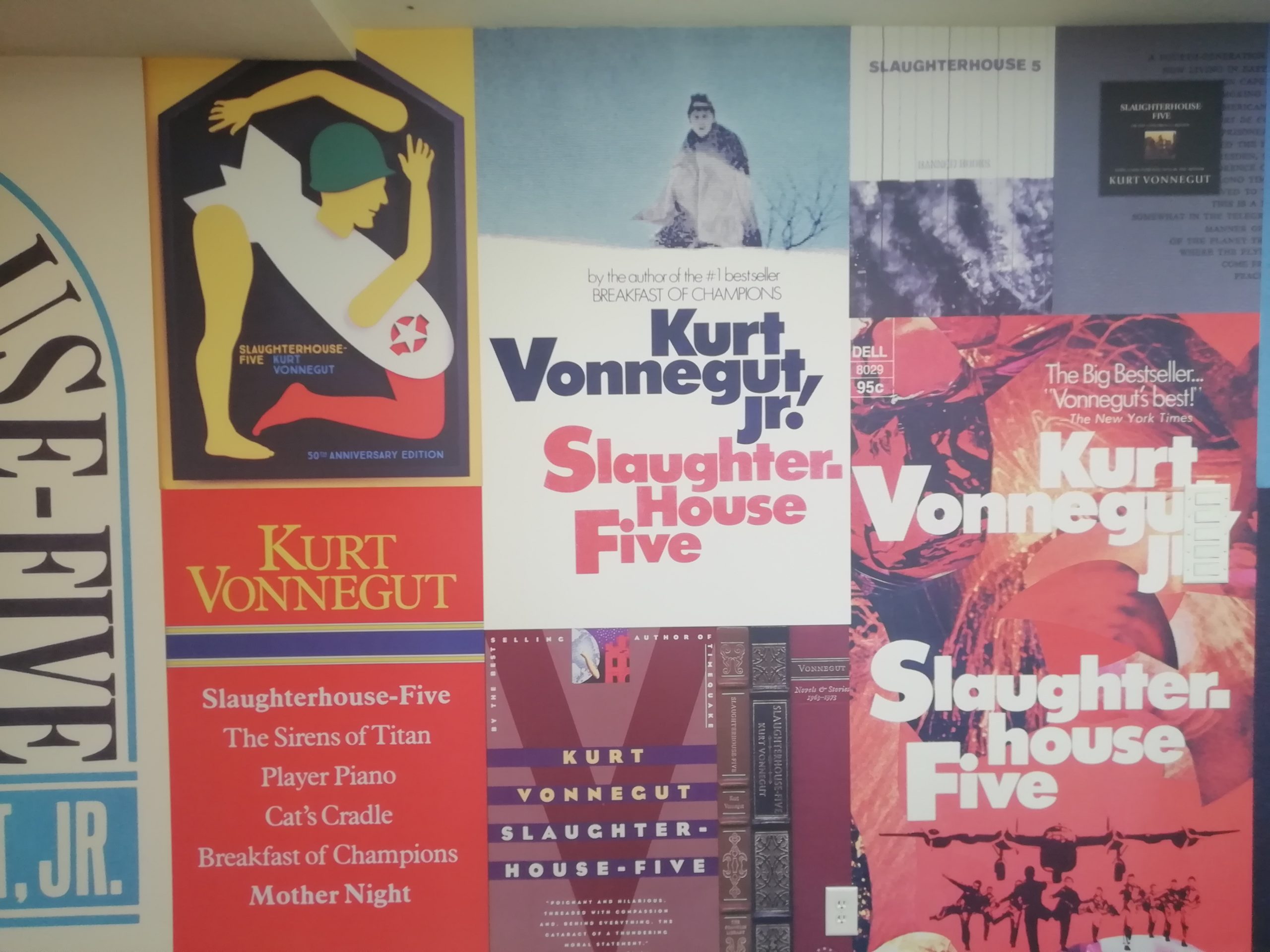 I meet Brittany, vice president, who kindly takes me on the tour of typewriters, banned books and a purple heart for frostbite (Vonnegut was somewhat dismissive of this). On one stairwell wall is a communally made quilt from the Indianapolis Modern Quilt Gild- “Practicing an art, no matter how well or badly, is a way to make your soul grow”. This wonderful and, I believe, true quote from Vonnegut, Is an inspiration to the space all around us. This is not just a museum and library “in memory”, it is a place of inspiration and encouragement. I tell Brittany about Josie Long’s UK charity Arts Emergency. 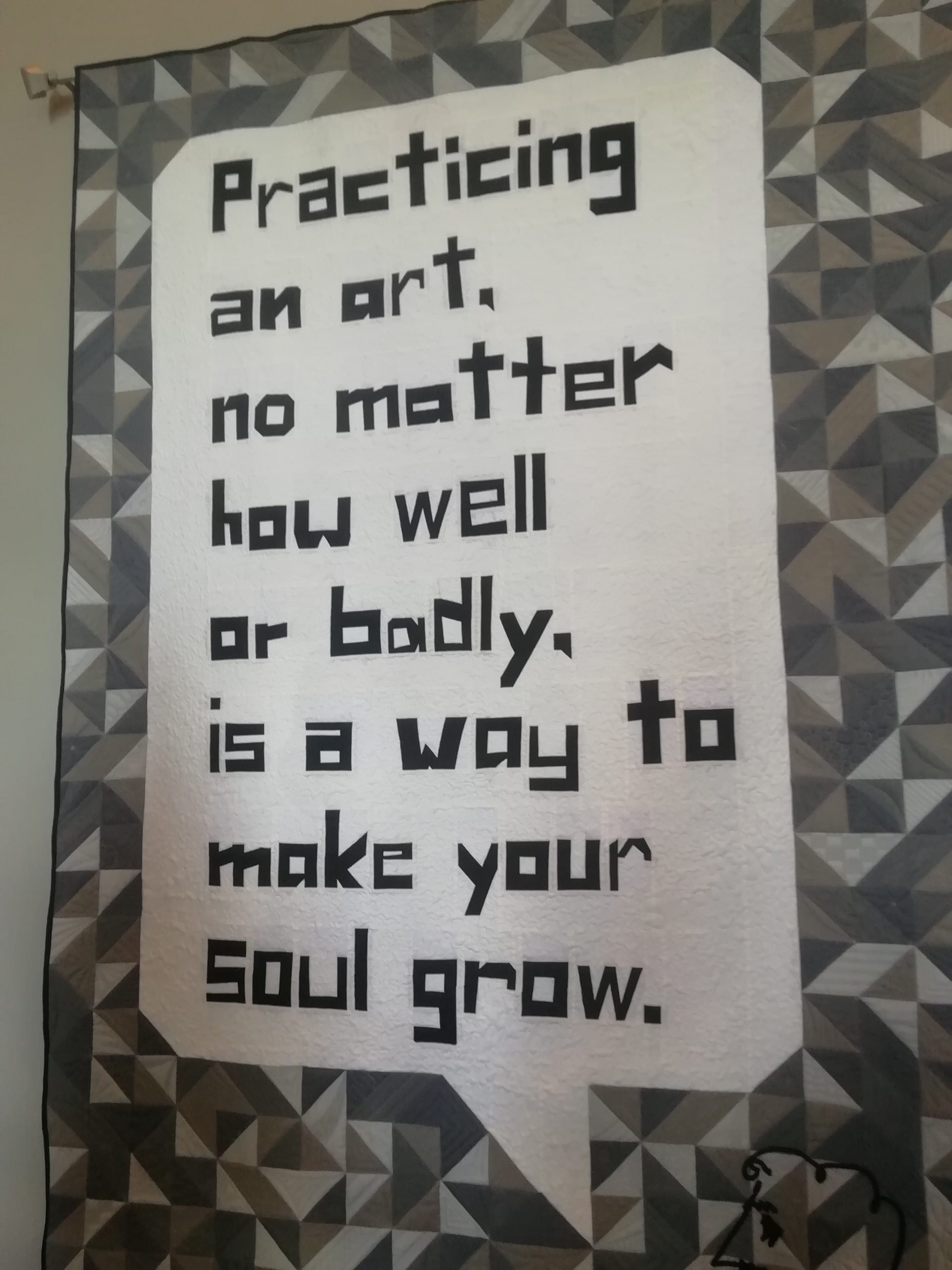 I see poster declaring “Beware of Artists – They Mix With All Classes of Society and are therefore most dangerous”. I presume this is ironic or from a manifesto, but it turns out that it is a straight down the line warning from Senator Jospeh McCarthy. A reminder that the increasingly far right hacks and politicians we see swivelling the Overton Window are no new demons. The bookshelves of banned books include the works of Octavia Butler, Margaret Atwood, Lenny Bruce and Jean M Aeul. On the wall near-by is Vonnegut’s letter to the chairman of the Drake school board who put him on the list of unsavoury books that would warp a child’s mind.

“…you should acknowledge that it was a rotten lesson you taught young people in a free society when you denounced and then burned books – books you hadn’t even read”.

Now, in the 21st century, the real book burning and the burning of rights comes from the right whose handy propagandists and dull-minded cheerleaders distract with warnings of the woke.

Rather than warp minds, my anecdotal evidence is that he humanises minds, encourages empathy and, of course, kindness. But as we know, empathy and kindness are threats for this solely driven by power and money.

I adored Ivan Mikelson’s bronze statute of Vonnegut, as emaciated as he was when returning from war but with the middle aged face of fame, perched on top books. 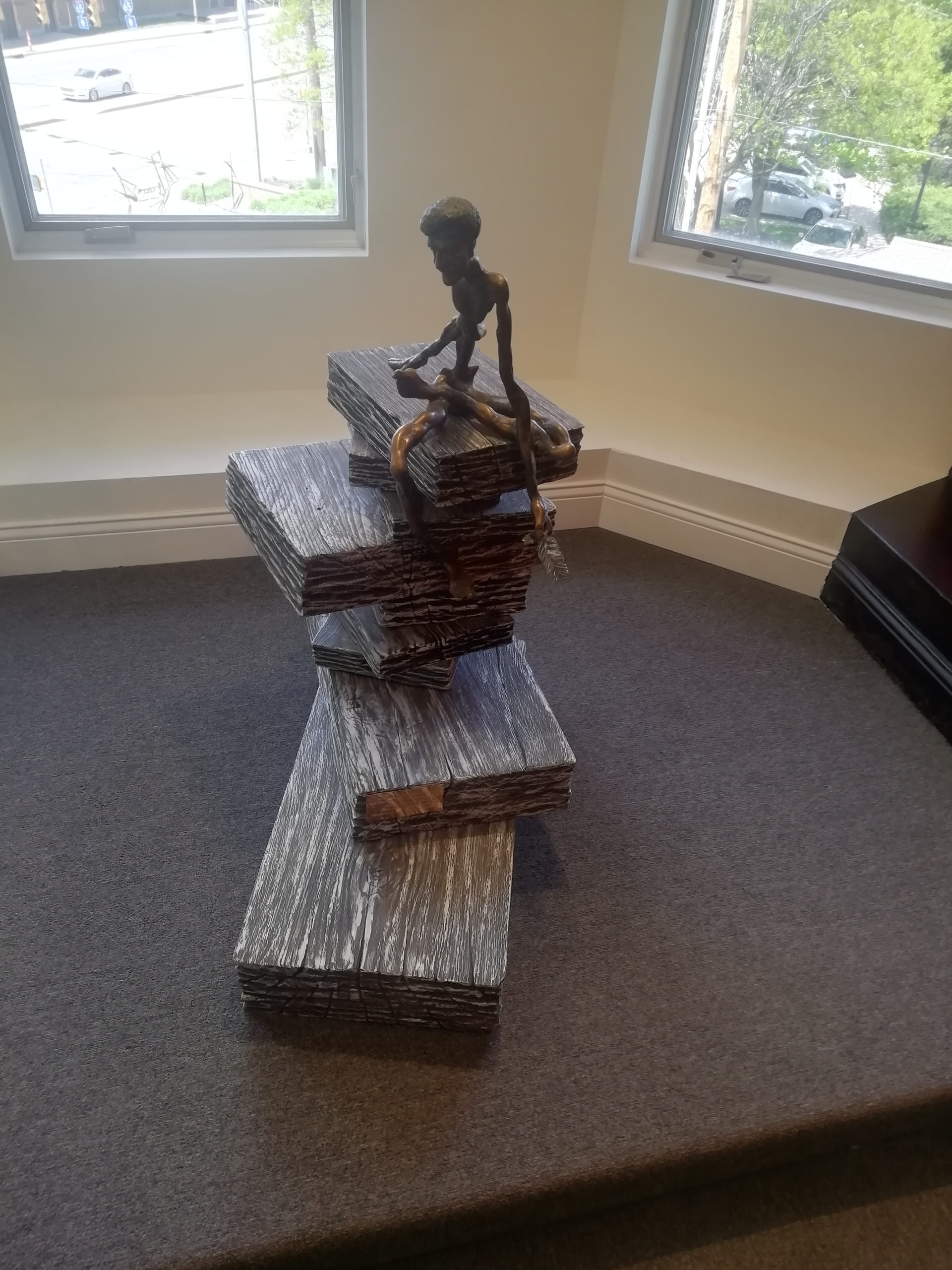 There is a display of women who shaped Vonnegut. His sister, Alice, died young, and Kurt and his wife brought up her children.

“I didn’t realise she was who I wrote for until after she died”.

He would imagine her behind him as he wrote. 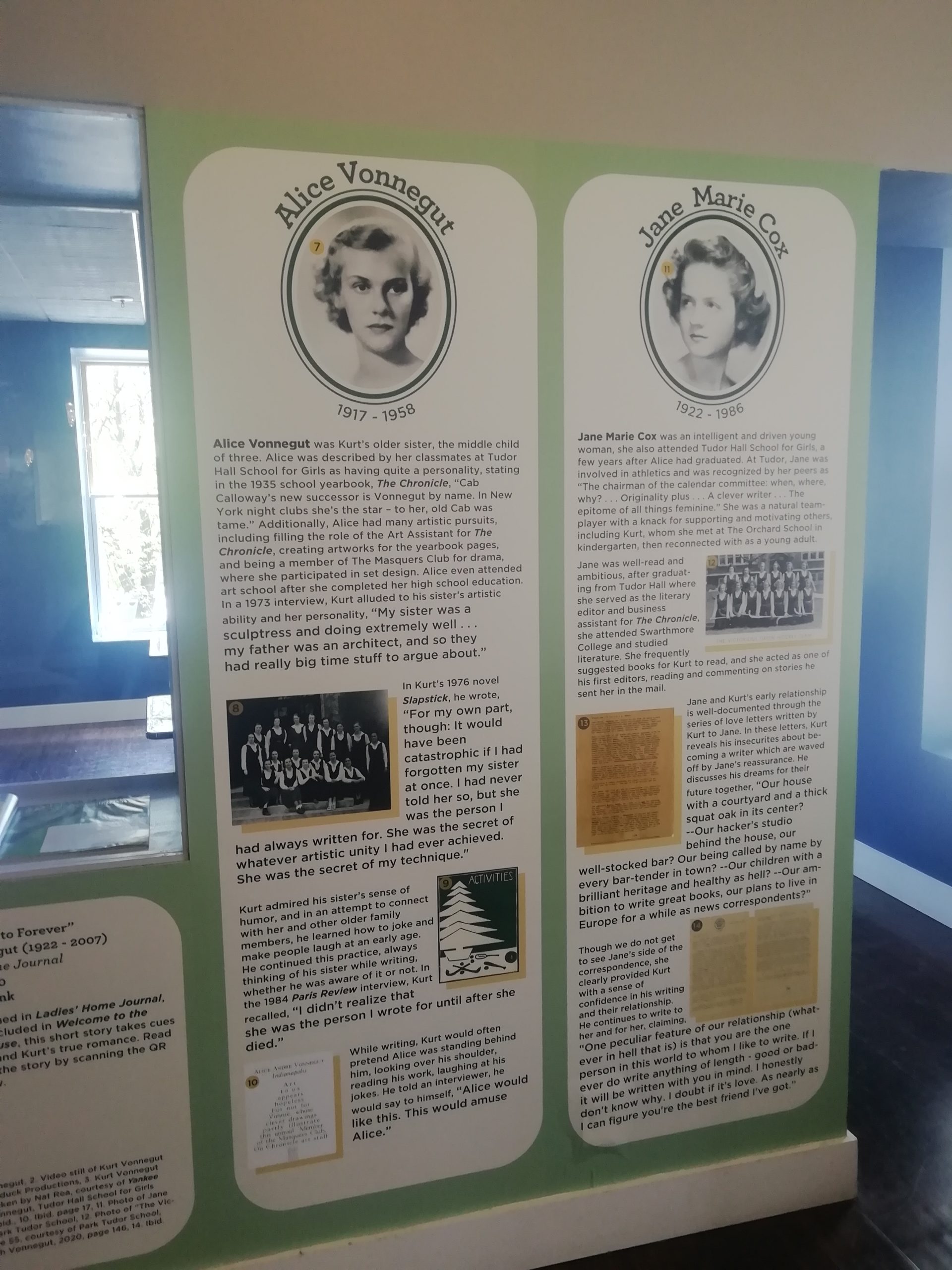 The tables throughout the library and museum are decorated with cases of artistic censorship such as Piss Christ. The top floor is Slaughterhouse-5 floor, with memories of Vonnegut’s war and others reactions to war, including the painting of Augustus Shawcross, a veteran dealing with PTSD. There is also the letter Vonnegut’s father sent to him as he went to war. It was retuned to sender and his father gave it to him when he returned from war. He decided never to open it. His son, Mark, inherited it and has respectfully decided not to open it too.

Sadly, the shop is short of sizes for its splendid T shirts, so I will order another day. Fortunately, their limited edition T short that chronicles the whole of his career for Sports Illustrated, all half of day of it, did fit me. His report from the day’s race was “the horse jumped over the fucking fence”. 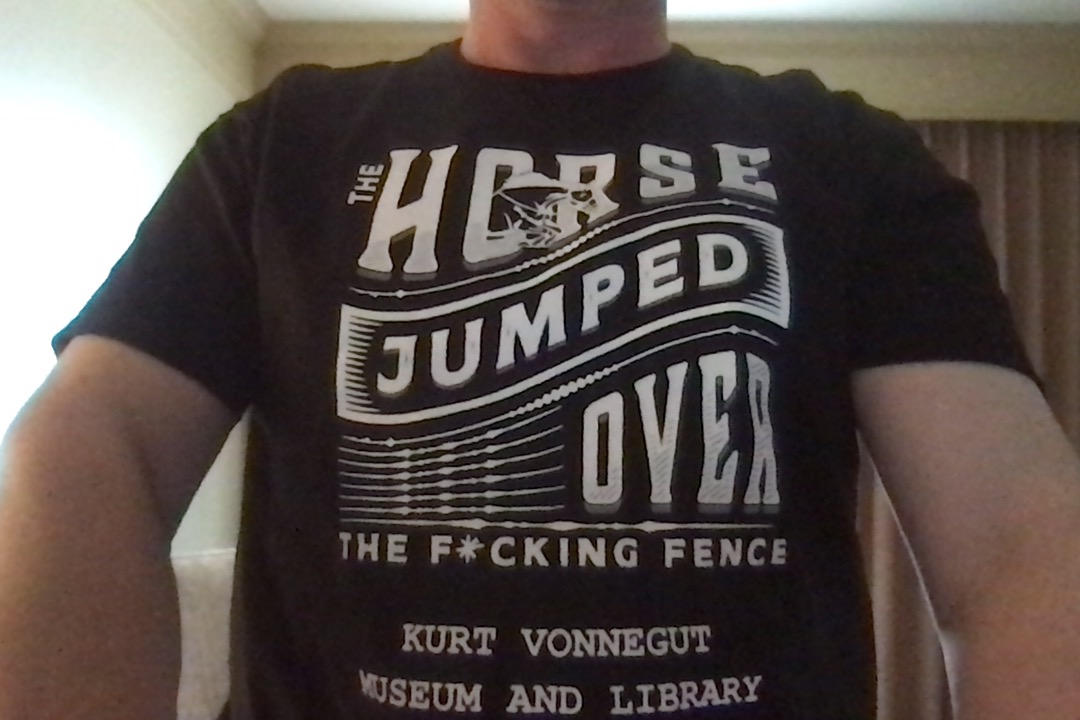 Afterwards, I walk down the canal. It is as picturesque as any promotional film aiming to convince you that this is where your family will grow and flourish. Couples hug on benches.

Toddlers greet strangers as they pass.

There are gondolas too, which remind me more of the Venetian hotel in Las Vegas than Venice.

I need a cereal bar so pop into the mall that smells sulphurous and has two children as different incarnations of Spider-Man. Looking at the confectionery, I am always tempted by the Twinkies and other chemically creamy sponges that remind me of the adverts in DC and Marvel when I was growing up. They are pre-empt a world of Soylent Green.

As I leave the Mall, a smartish looking woman leans into a trashcan and opens up a fast food carton.

I was allowed to opt out of boxing training for Vonnegut, but I agree to lift weights for 30 minutes with a view of a pool where people inhale chlorine while lying in towelling and doing nothing. 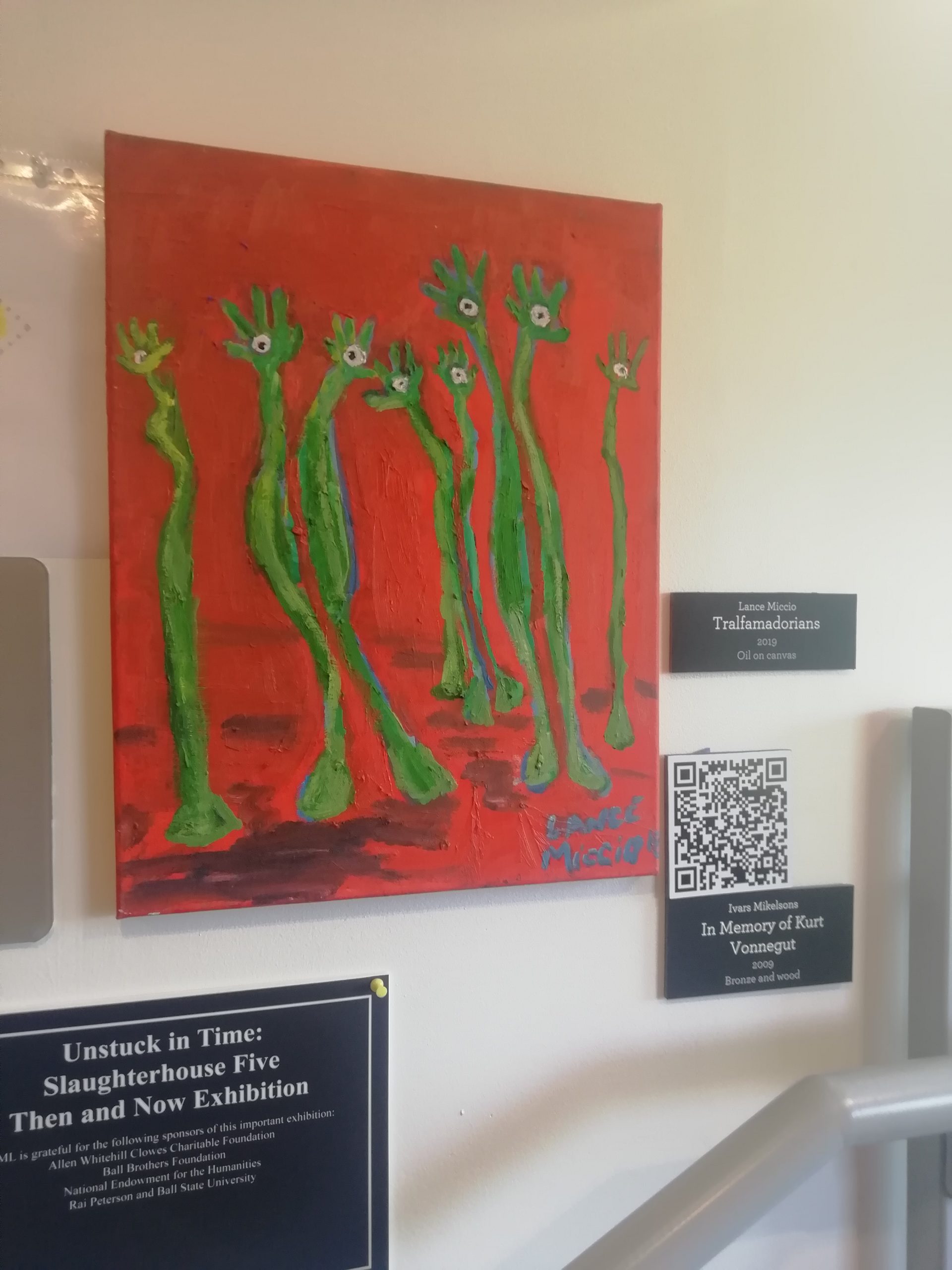 Tonight’s theatre is beautiful, historical and undersold. It is the smallest audience of the tour, so the dressing room is full of firing squad humour and reinvented jokes from Morecambe and Wise about Ernie’s fan. There was nothing to fear. They are an engaged and friendly audience.

I am feeling very tired, but Brian has had a two nap day – one mid morning and one mid afternoon, so he’s a dynamo.

We are straight on the road to Chicago where I will read one of the Harry Stephen Keeler books that I used to read live in an onstage game with Alan Moore. Sadly, I do not have a copy of The Man with the Wooden Spectacles, one of our favourites.