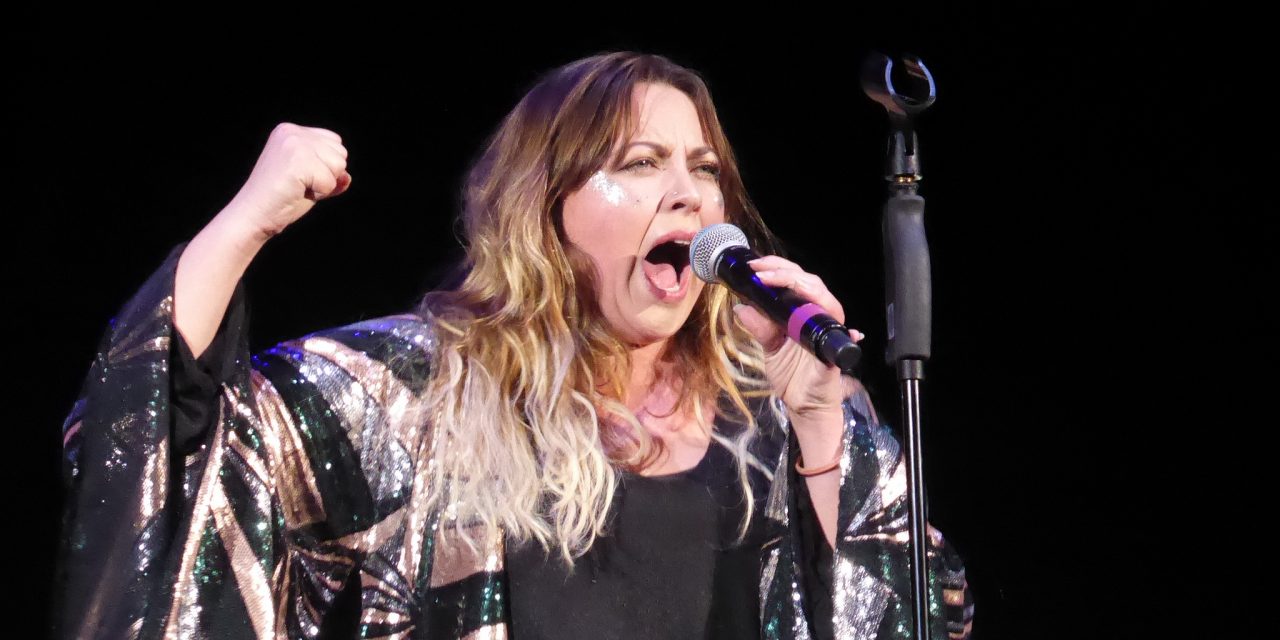 Another year at Hammersmith is in the books. We’re all a bit tired so here’s a rundown of what went on at the Hammersmith Apollo last night.

10 minutes before the official start time, The Steve Pretty Band got everyone in the swing of things with some delightful jazz. 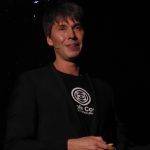 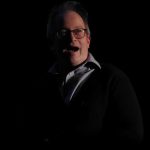 Quotes from astronauts and the like fill the big screen until Professor Brian Cox wanders into the spotlight to talk about cosmology. He’s soon joined by Robin Ince to talk of how his impression of him is starting to turn into Orville and the show is off and racing.

Hannah Fry is first up to discuss Markov chains and the Royal Family before Laura Kidd of She Makes War joins the band for a number.

Andrew Steele is next with his favourite medical record codes and then it’s Adam Rutherford to talk of genetics and family trees.

Robin pops back between acts to divulge his love of 24 Hours in A&E and shows about canal boats. 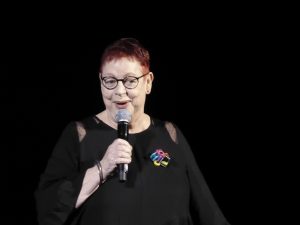 Then it’s time for someone we’ve tried to have on the Compendium for years, but is the one of the busiest people around so schedules were always clashing. Needless to say, Jo Brand goes down a storm.

Next up is our good friend from Australia, Dr Karl, to warn us how mixing Diet Coke and rum can lead to a life of Harley Davidsons and dealing meth.

Grace Petrie takes the stage with the band for a rousing rendition of ‘These Boots Were Made for Walking’ complete with some extraordinary clog dancing from Hannah James.

Compendium stalwarts Festival of the Spoken Nerd are next and Matt Parker wants to talk parabolic functions. Steve Mould and Helen Arney turn it into an explosive end.

Lucy Cooke is next to talk animal sex and then Ben Goldacre turns the sell out crowd into a useful dataset for his work on retracted papers. Python code, camera lights and the usual Goldacre hyperactivity get the job done.

To take us to interval it’s Charlotte Church and her Pop Dungeon with a storming medley of hits that more or less blows the roof off of the Apollo. They finish with a rendition of the theme from ET and we hit interval only running a bit over time…

At interval it’s announced that on June 15 2018, we’re taking over the Royal Albert Hall for Robin Ince + Chris Hadfield’s Space Shambles. A huge new show. Info on that is here.

After interval Brian returns to introduce his Stargazing Live co-host Dara O’Briain to talk of working with Brian and the perils of app controlled lighting.

Next is Jim Al-Khalili to explain the link between quantum entanglement and wormholes in 6 minutes.

Some more stonking jazz from the Steve Pretty Band and then it’s a Physics Q&A panel. Robin and Brian return to the stage with Chris Lintott and Jon Butterworth.

Armed with some of his own pictures taken from the ISS, next is our astronaut of choice, Chris Hadfield who shows everyone the M25 from space.

Then because one astronaut is never enough, Terry Virts joins Chris with Robin and Brian to talk space. At which point the screen dies. Which throws Brian’s upcoming lecture on gravitational waves into a bit of a pickle. 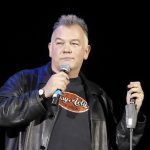 Meanwhile our third astronaut of the evening, Stewart Lee takes the stage to lament how indie space travellers like himself are too often overlooked for the more commercial NASA astronauts…

With the screen still out of commission, Brian explains gravitational waves the best he can without his graphics to a doe eyed Dara O’Briain and Robin Ince.

Sophie Ellis Bextor closes the show with a beautiful version of No Stars from Twin Peaks and then gets the crowd on their feet with Murder on the Dancefloor. For which she’s joined by Charlotte Church and some experimental dad dancing from Brian, Jim, Dr Karl, Dara and others…

And that’s it for another year and only just a few minutes past 11pm in the end.

Thanks to everyone who came along and supported the show. As always, the Compendium raises a lot of money for some amazing charities and proceeds will go to support to S.O.P.H.I.E. and MSF.

There are still some tickets available for the four Nine Lessons and Carols for Godless People shows at Conway Hall on December 16. 19, 20 and 22. Tickets for the Royal Albert Hall show are on sale now as is Brian and Robin’s arena tour in 2019. 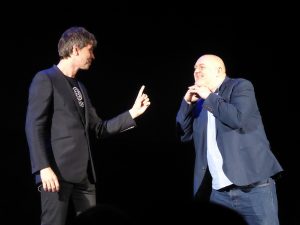 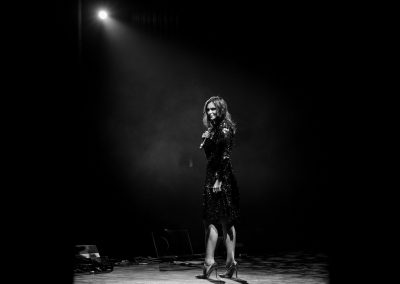 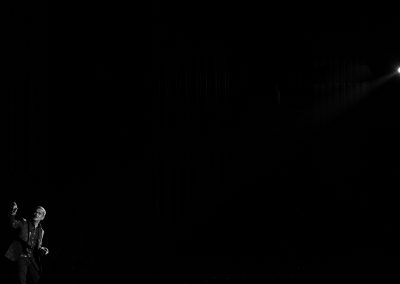 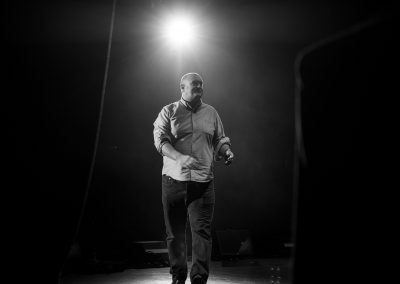 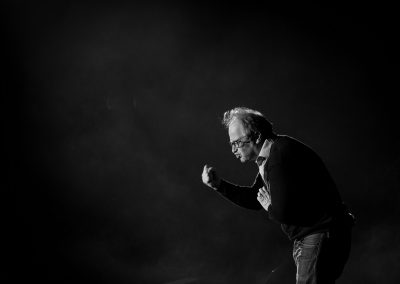 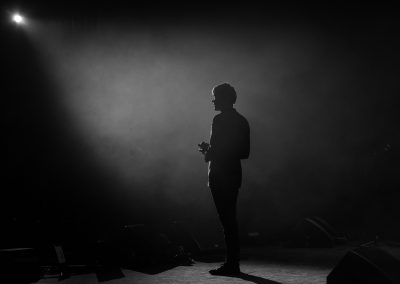 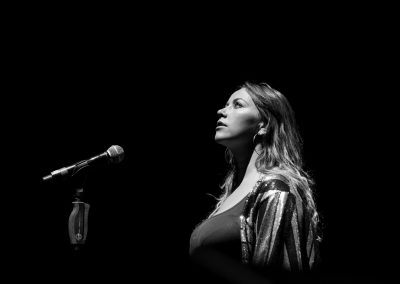 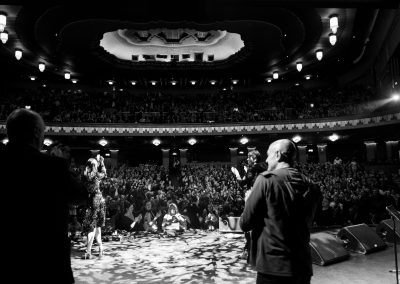 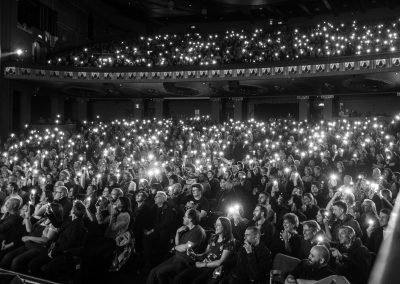 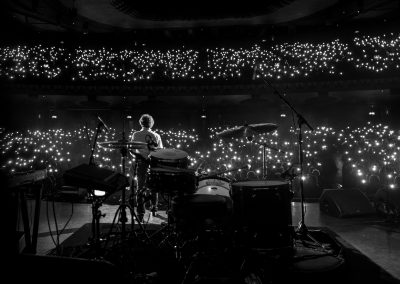