Twelve Months Like No Other – Shambles’ Year in Lockdown 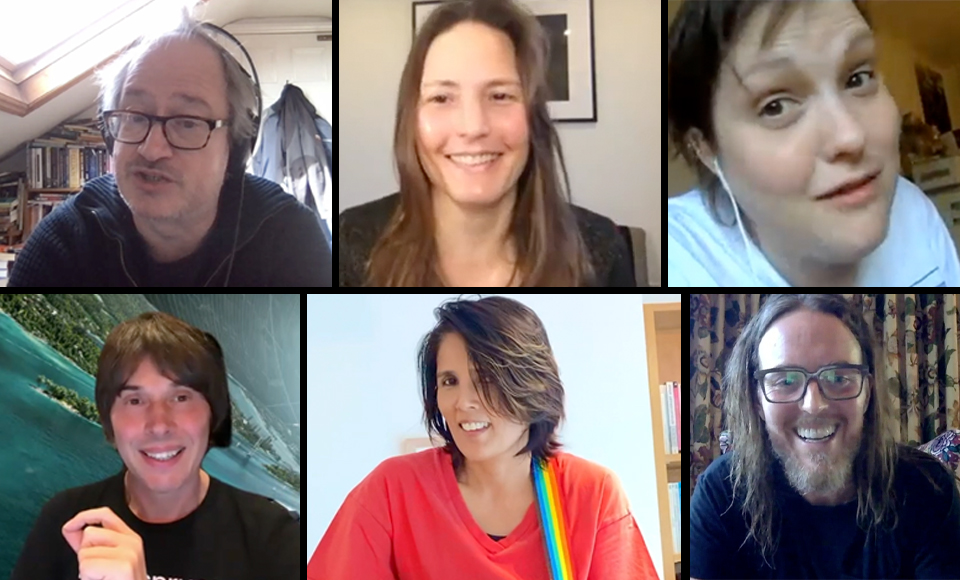 Somewhere in mid March 2020 it was pretty clear something drastic was about to happen.

On March 11th, WHO declared a pandemic. A quick look back through my emails and texts reveals that it was March 13th that Robin Ince, Josie Long and myself first said, ‘We should do something online’. Something, as it tends to with us, got out of hand at a pretty rapid rate of knots.

First up we we decided we would do a daily morning show, hosted by Robin and Josie. Then the brilliant Dr Helen Czerski came on board and we settled on a weekend science show hosted by Robin and Dr Helen Czerski, a weekly family focused science show hosted by Helen, and then also Friday night comedy club, hosted by Josie and John-Luke Roberts. I spent most of that time trying to work out if such a thing was technically possible, from everyone’s homes, with no budget. Robin started pulling together some guests. We called it The Stay at Home Festival and decided to run it through the entire first lockdown at a minimum.

Now, we knew it wouldn’t be the slickest operation at first. We broadcast our chaotic tech run live, (because why not?) one year ago today, on March 16th, only three days after we’d come up with the idea. We knew that people were worried about isolation, about what was going to happen, and so we just wanted to get out there ASAP to give people a bit of company each day. And we wanted to offer help to those in our industry who would be hit hardest for the next few weeks too. (Back then we thought it might only be a few weeks, or months at most, because, well, let’s not get into that…). The show would be free, but with a tip jar, with all profits going to struggling artists and arts venues. Over eight weeks of daily shows we raised £50K. We are all immensely proud of the fact that while most of the bigger outfits spent most of that first eight weeks working out what to do we just did what we always did and got on with making stuff. Less meetings, less focus groups, more doing.

And so it was that after that predictably mad tech run show where almost everything that could break, broke, I worked 27 hours a day over the next few days and then on Saturday March 21st 2020 we did our first proper livestream show. A science Q&A show hosted by Robin and Helen, with special guests Professor Brian Cox and Miranda Lowe. That would become a regular Sunday Science Q&A, hosted by Robin and Helen pretty much every week for a year. A year like absolutely no other. But here we are, twelve months later with something that, if you squint, might just be hope on the horizon.

The Stay at Home Festival comprised around 80 shows in that first eight weeks with at least one show every day. The messages we got from so many viewers saying the routine of our nonsense each morning was what was getting them through it were nothing short of delightful.

This Sunday we’re ‘celebrating’, one year to the day of that first livestream proper, with a special Sunday Science Shambles Q&A show when Robin and Helen will be joined by astronaut Nicole Stott. We’ve had half a dozen astronauts on the livestreams this past year yet, somehow, never on the Sunday show! On March 23rd, one year to the day since the first Stay at Home Festival morning show, Robin and Josie will reconvene at 10am, live, for a bit of a chat and a song or two from Grace Petrie.

In the past year we have done, at least:

Pretty much all of this is still available on catch up on our YouTube channel or wherever you get podcasts. We’ve had hundreds of incredible guests from astronauts to Olympians, award winning musicians, performers and poets, scientists authors. There’s been Robert Smith, Chris Hadfield, Helen Sharman, Tim Minchin, Lemn Sissay, Samantha Cristoforetti, Jo Brand, Guy Pearce, Chris Jackson, Cobie Smulders, Sharon D Clarke, Tim Peake, Alice Roberts and SO MANY MORE.

As so things roll on. And on. And on. The entire Shambles team’s incomes, like so many, have been savaged. We’ve cancelled well over 150 planned live shows as a production company in the past year. Thanks to the support of our small Patreon army, we’re able to keep going, producing shows from home that have been viewed and downloaded millions upon millions of times this past year. If we could get our Patreon supporter numbers to be just 5% of our total audience, things would start to look a lot brighter. If you’re already a supporter, THANK YOU. If you’re not, and you’ve enjoyed any of the stuff we’ve put out this year for free, and you can afford a couple of quid a month, here’s where to sign up.

You get loads of extra stuff too. For example, in 2021 launched two new Patreon exclusive audio documentary series, Tips for Existence and An Uncanny Hour.

And so on behalf of all of us at Team Shambles, we really want to take this opportunity to thank all the people who’ve watched and listened to the stuff we’ve created this year. We really, really want to thank all our Patreon supporters, both old and new. Thanks also to people who dropped a tip in Stay at Home Festival tip jar or bought a virtual ticket for the 24 hour show. Thanks too to all the many guests who’ve given up their time to come on and talk nonsense or play or song or do an experiment. It’s been, well, it’s been something.

We really, really hope we can all be back on stage, with you all in theatres, soon. Plans are already underway, with a dash of optimism, for the 2021 edition of Nine Lessons, Compendium plus live Book Shambles events and more. Until then, we’ll be here, online, Shambling away. And, now, like the start of a Book Shambles podcast, let me end by saying, here’s Robin…” Trent Burton, producer, director and co-founder of The Cosmic Shambles Network

“Every morning I wake up and worry about what I have to do and I worry that I might have nothing to do. Sometimes I imagine what it might be like to switch off or to take a day off without any work. Usually, this is Christmas Day (excepting 2020 when we did a show) and on Boxing Day I come up with a new idea and start working on the book/podcast/screenplay/stand up show. Then I get distracted and start thinking about another thing to make or do.

My focus is not great. I will passionately come up with a new idea and be bored of it by dusk. The best moment is imagining what it could be before the practicalities. This is is why stand up is useful. No excuses. No putting it off. The people are there. GO. You can only procrastinate so much on stage unless you are a Dadaist act whose aim is procrastination.

When I started crossing out events in my diary last year, I knew there was trouble ahead (I mean, I knew there was a pandemic ahead, but also the trouble of WORK). By mid-March, the Spring to midsummer section of my diary was a museum of no mores including a big event at the Royal Albert Hall, Glastonbury and a folklore festival about fairies in Hebden Bridge.

Trent and I started talking. He is unable to do nothing, too. Josie Long had a tour that was now gone, this was to be her first year of properly getting back on the road since having a child. This would not do. Sure, I could really focus on that book I had a deadline for, but that would not be enough of a febrile distraction, so we dreamed up the Stay at Home festival. At 10am every morning, Trent, Josie and I would put on a live show with guests and acts. Many performers had been hit by the panic of not doing anything, so most emails or texts were answered within a minute “YES”. Some days we did two shows in a day, occasionally it was three, and it seemed to work as a connection and a distraction for all the people confused at home. Josie would co-host a stand up show on Friday and on Sunday we began our Sunday Science Q&A with Helen Czerski, me and science guests. The daily show continued for two months, but at the end of that it seemed it had done its work as a transitionary show into this new uncertainty. The Science show live remains. The money we raised went to art centres and acts that were facing difficulties.

By late Summer, Trent and I realised that we had to start making Cosmic Shambles more financially viable for us too, we haven’t got there yet, but I hope we are building something. Like most people in the arts, this sector which is worth so much to the economy and yet is dismissed as if it is just a hobby by governments, we had lost between 80 and 90% of our paid work. Now Trent had mastered the new technologies to replace face to face studio and stage time, we came up with new ideas. Some didn’t work, others did. I think An Uncanny Hour is going to keep running for a while yet and Tips for Existence too. Book Shambles and Sunday Science will hopefully run until we stop running.

Thank you to everyone for their support, there is much more to come. Like much in the entertainment world, I hope we have turned our character flaws into something useful. – Robin Ince, comedian, presenter and co-founder of The Cosmic Shambles Network 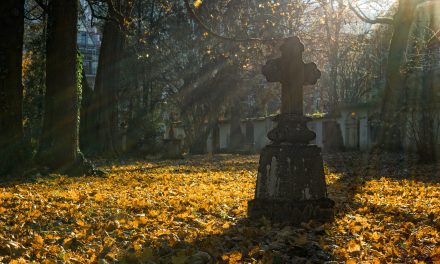 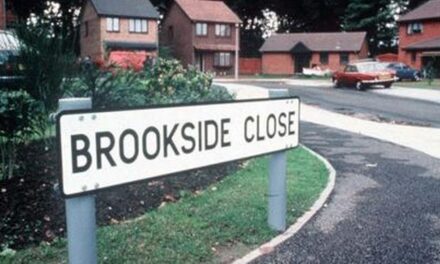 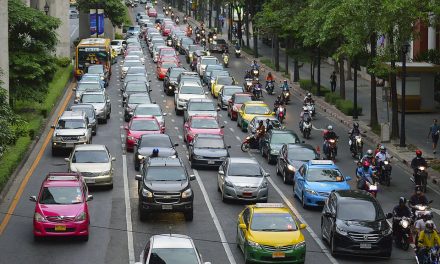