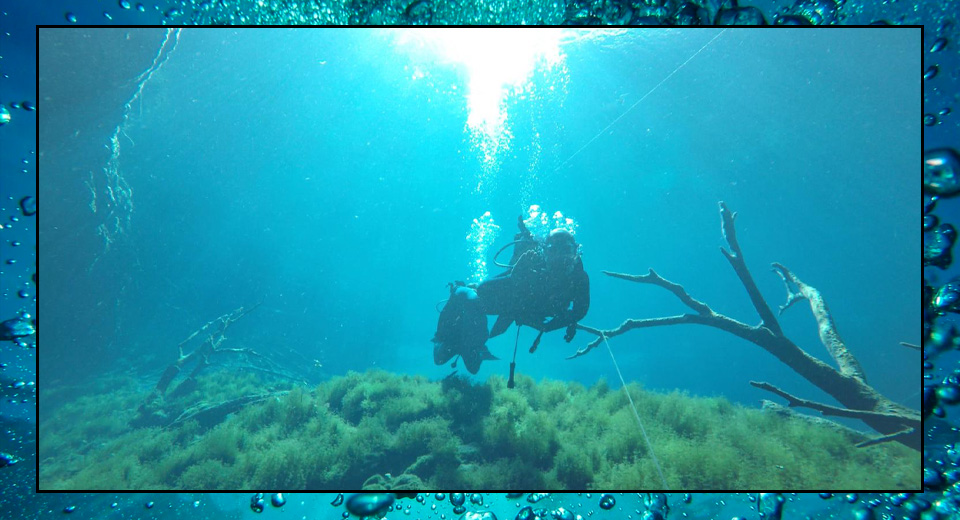 This photo was contributed by my neighbour Tom, who is currently full of enthusiasm for SCUBA diving (having completed his dive qualification two weeks ago).  I’m cheating slightly here, because this photo was taken in a cenote rather than the ocean itself.  A cenote is a sinkhole, a sunken pit often associated with the Yucatan peninsula in Mexico.  The best thing about cenotes is that the rock that they plunge through is porous, and so seawater can sneak through the rock from the side to fill the bottom of the pit.  It meets fresh rainwater that’s been funnelled into the top, and consequently many cenotes have two water layers sitting on top of each other: salty seawater below and fresh rainwater on top.

The reason I picked this picture is because of what’s carpeting the floor: plants.  Tom’s general opinion was that caves were really exciting, but places where there were “just plants” were best used as thoroughfares, not a final destination.   I disagree.  But the reason why is tied up in what a “plant” in the ocean actually is.

Photosynthesis is one of the most essential processes for all life on Earth: the harvesting of sunlight to build life’s construction materials (sugars, proteins, lipid and more) from raw materials, and creating oxygen as a by-product.  About half of all the oxygen in Earth’s atmosphere comes from photosynthesis that happens in the ocean.  But most of that half has nothing to do with plants.  The heavy lifting is done by vast numbers of tiny phytoplankton that drift around the ocean surface, and these are algae, not plants.   Land plants evolved from green algae, many hundreds of millions of years ago, and they’ve been separate ever since.  Seaweeds (like the frond-like slightly slimy ribbons that wash up on beaches) are algae.  A land plant has internal plumbing to help move water and sugars around, but seaweed has none of that.  A land plant has roots and seeds and burrows down into soil to extract nutrients, but seaweed just clings on to the outside of a rock.  Many land plants have flowers, and seaweed certainly doesn’t have those.  They’re (often) both green or brown on the outside, but pretty much everything on the inside couldn’t be more different.

But that’s what makes the plants in this picture so interesting.   These are species that evolved on land, as land plants, and then moved back into the ocean.   I think that this part of the cenote had fresh water, so these are freshwater plants, but the ocean itself hosts a very important group of renegade plants: the seagrasses.

Seagrasses are fascinating: they’re descendants of flowering plants, so they have flowers, seeds, roots and leaves, just like flowering plants on land.  They’ve got a fairly hefty series of modifications to allow them to live in seawater, but they have basically the same structure as a daffodil.  This makes the seagrasses the plant equivalent of dolphins and whales, which evolved from land mammals that moved back into the sea.

Seagrasses form huge underwater meadows, which provide shelter and food for all sorts of animal species.  These meadows are extraordinarily productive ecosystems, which also improve water quality and stabilise the seafloor (just as trees on land help prevent erosion).   They’re also very efficient at extracting and storing carbon, meaning that they are vital allies in the fight against ever-increasing levels of atmospheric carbon.

So I think that although algae is pretty awesome, actual real plants in the ocean could do with getting a bit more press.  It’s amazing enough that they’re successful refugees from the land (how can you beat underwater flowers?), but they’re also very important for the health of the coastal ocean.  I reckon that Tom probably still won’t find them as exciting as caves, but maybe he’ll at least stop to look at them next time he swims over some.