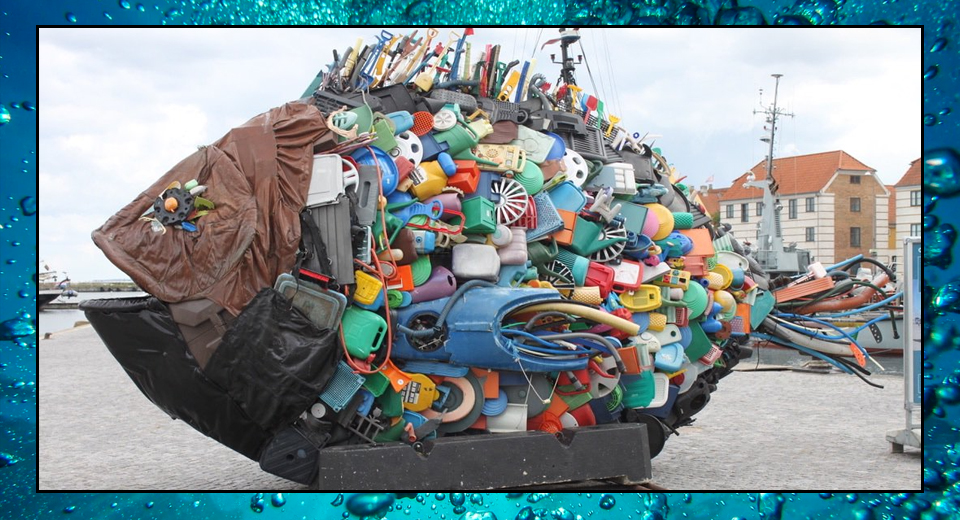 I wanted to stick to positive topics in this project, but these two photos were too good to leave out.

These photos were sent by @MarkCNorwich (a fish made from marine rubbish in Helsingborg, Sweden) and @Auntie_andie (a recycled plastic whale in Utrecht).

We all know about the problem of plastics in the ocean now.  Marine microplastics were first reported by scientists in the 1970s, and I remember active debate about it in oceanographic circles ten years ago, but the past couple of years has finally seen it hit the mainstream.  About time, you might say.  Pieces of art like the fish and the whale are highlighting a terrible problem, but in a beautiful way.  The estimates are that around ten million tonnes of plastic enter the ocean each year.  Once it’s there, getting it back isn’t really an option – the ocean is just too big and too dilute, and the plastic pieces are often pretty much the same size as all the other stuff that’s meant to be in the ocean (like tiny marine animals, and the fragile agglomerations of organic crud that all sorts of things feed on).  The solution is to stop putting the plastic in there in the first place.

Nature may be able to offer us a tiny glimmer of hope with the plastics problem, though. Plastics are made of oil, and oil and natural gas have been seeping into the ocean naturally for millennia.  They’re energy-dense molecules, and nature very rarely lets potential food sources go to waste. After the horrific BP oil spill in the Gulf of Mexico in 2010, scientists discovered that there were indeed microbes munching on the smallest molecules released by the spill – the methane (natural gas) and the shorter hydrocarbon chains. Different species were feeding on different molecules.  They did a half-decent clean-up job, but only on their chosen molecules. Bacteria like these need oxygen and nutrients to do this job, and if those run out, so will their cleaning ability.   But it’s a start, and it showed that nature had already come up with enzymes for attacking naturally-occurring hydrocarbons.   Mysteriously, some of the highest concentrations of these oil-eating bacteria have been found right at the bottom of the Challenger Deep, 10 km beneath the ocean surface.

So what about plastics?  They’re much bigger and more robust molecules, and they don’t dissolve in water.  But they do have a similar underlying structure to the molecules in oil. And in the past few years, a few species of bacteria that can pick away at plastics have indeed been found.  They’re not very efficient, and they’re not that plentiful, but they exist. At least some of these bacteria can’t get started until the plastics have been weathered by light and the environment. There are many current studies trying to pick apart this problem, with the aim of understanding what enzymes the bacteria use and how efficiently they can feed on plastic. So we don’t know where this will lead. And it’s worth considering whether we really want a world full of plastic-eating bacteria – that would make many plastics useless, and might create even more plastic waste in the long run, if bacteria cause damage that means a plastic item has to be discarded.

But really, the message is simple: we need to sort out our own problem, without assuming that nature will clean up after us. Christmas is a good time to think about this stuff, because it’s easy to take plastic packaging, unwanted plastic toys and single-use presents for granted. We really don’t need all that, and it won’t hurt anyone to do without the single-use tat.  And here’s a tip: reusable cups and water bottles (for example) are fantastic, but if someone already has one, don’t buy them another one as a present because it defeats the whole point. I’ve had my Keepcup for two years. It comes with me everywhere and it’s still going strong.  I certainly don’t need another one.

But the most important thing is to do your best – we don’t yet live in a society where it’s straightforward to live a plastic-free life, but small everyday decisions will add up and make a difference.  Here’s to a lower-plastic Christmas than last year!