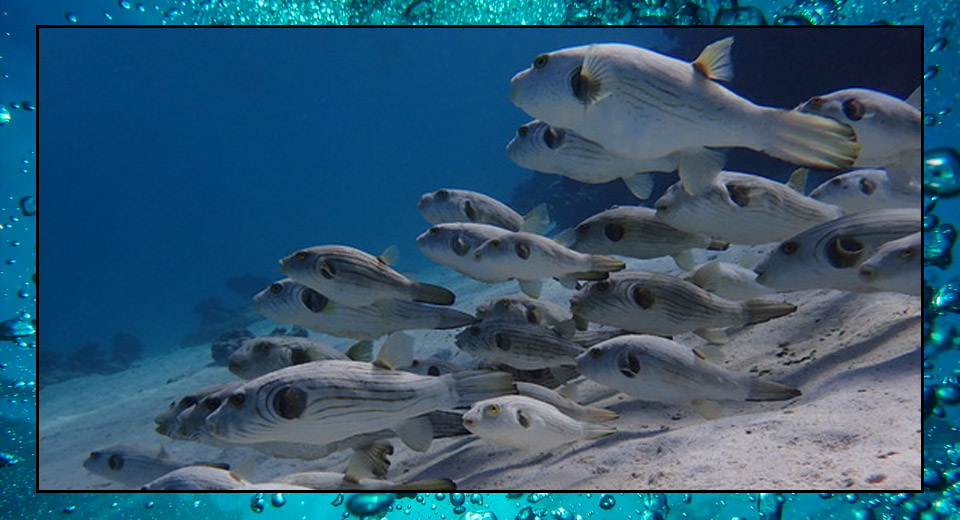 There are two things most people know about pufferfish. One: eat the wrong bit and it will kill you (true). Two: pufferfish, well, they puff don’t they (also true). It takes roughly 15 seconds and 40 or so puffs for a pufferfish to suck in water and inflate up to three times its original volume. To allow for this, puffers have lost their ribs and evolved incredibly stretchy skin, eight times stretchier than normal fish skin. This defence mechanism was one aspect of pufferfish that a pioneering marine biologist studied back in the 1940s.

Eugenie Clark was nicknamed the Shark Lady for her ground-breaking work on shark behaviour, helping to rebrand them as intelligent creatures rather than mindless killing machines. But Clark studied many types of fish throughout her long and distinguished career.

Her first paper, in 1947, was a treatise on pufferfish and their cousins in the Tetraodontidae family. Pufferfish relatives include weird things like triggerfish (with a spine that flips up in defence), boxfish (which are very square) and ocean sunfish, the biggest bony fish, and which have been described as swimming heads. Clark studied preserved specimens of all sorts of tetraodontids. She blew air into their stomachs through a straw to see which ones she could inflate; lots of them did, but not the sunfish (imagine what these huge fish would look like puffed up!).

I was lucky enough to meet Eugenie Clark, a few years before she died. I had loved reading her books (the Lady with a Spear and The Lady and the Sharks) about her adventures working in remote, far flung corners of the planet, then founding the Cape Haze Marine Laboratory in Florida, later renamed the Mote Marine Laboratory. It was at Mote that we met and spent a glorious lunch together, chatting like old friends.

I was, of course, tremendously sad to hear of Genie’s passing a few years later, but I love the story of the final scuba dive she went on. She was in the Solomon Islands studying oceanic triggerfish, a species which spends most of its time swimming through open water but coming to the seabed to lay eggs in nests made from piles of broken corals. Lots of tetraodontids make nests, including Japanese pufferfish that sculpt elegant circles in the sand.

The thing about oceanic triggerfish is their nests tend to be quite deep, so not a lot is known about them. But that didn’t stop Genie. On what turned out to be her very final dive, she went to search for triggerfish nests25 metres down, an unimaginable feat for most 92 year olds.

I look back on the brief time I spent with Genie and realise that she silently set me a challenge, one that I gladly accepted, but that I need to keep reminding myself — to do everything I can to be as adventurous, generous and curious about the world as she was.

If you want to know more about pufferfish, triggerfish and all the other ichthyological wonders of the sea, then check out Helen’s book Eye of the Shoal.

Dr Helen Scales is a writer, marine biologist and broadcaster. She has written several books about the ocean including Spirals in Time, and New Scientist book of the year Eye of the Shoal. She has appeared on numerous programmes talking about the sea including The Infinite Monkey Cage.