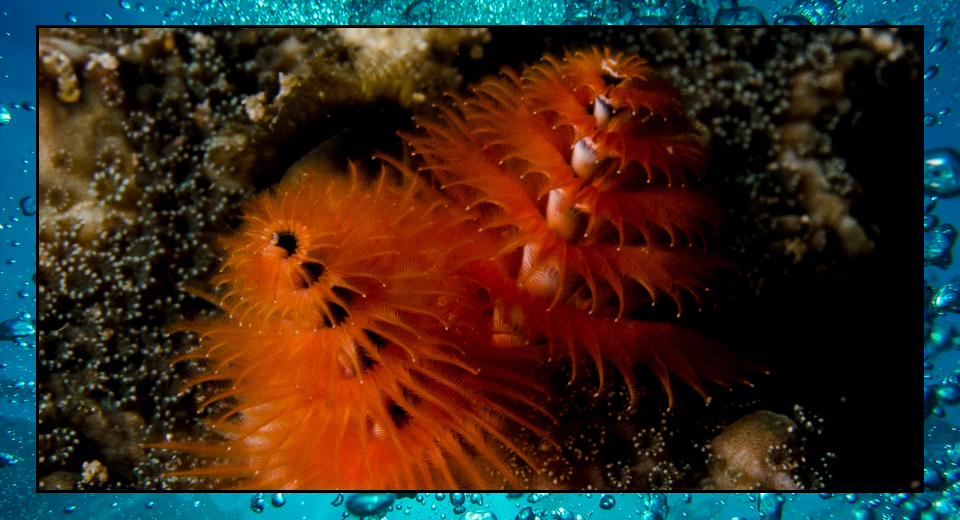 Happy Christmas from all of the Cosmic Shambles team!  To celebrate, here’s something that we promise we haven’t made up: a Christmas tree worm.

Today’s photo was kindly shared by our own @stevepretty , jazz trumpeter extraordinaire and thinker-up of some pretty spectacular musical creativity that will be on stage for our huge #SeaShambles show in May (but shhh, the musical magic still a secret and we’re not allowed to tell you about it yet).

Christmas tree worms are one of those beautiful reminders that the best place to go looking for alien life forms is definitely the ocean.  I first saw them on reefs in Curacao, and they’re endlessly entertaining, even for a physicist.   Their official name is Spirobranchus giganteus and most of the worm is actually living in a calcium-based tube that it’s built for itself inside the reef structure.  The worm can’t move and it can’t swim.  What you can see in the picture are two spectacular soft spiral structures that poke up into the water column from the embedded worm, and they come in a hugely impressive range of very bright colours.   Their similarity to Christmas trees is what gave the worms their name, and they put even the most gaudily-decorated Christmas tat shops to shame.  Each mini-Christmas tree is 2-3 cm long.

Particles of food that are drifting past in the water column get trapped in these feathery fronds, which are really elaborate mouthparts.  Tiny waving hairs pull the particles down into the worm’s digestive system.  The fronds are also used to help the worm breathe, so they do the job of gills as well.

All of this is lots of fun, and would be worth watching all by itself.  But the bit that divers notice is that if you swim past, disturbing the water more than normal, the worms whip their Christmas tree mouths back inside the tube, vanishing in a fraction as a second.  If you hang around and stay still, the fronds will slowly reappear, the mini-Christmas trees re-growing in front of your eyes.  But kick a fin slightly too hard and pfft, they’re gone.    It is absolutely the ocean’s version of a pantomime character, with the reef calling out “it’s behind you” just before it disappears completely.  These little worms are easily the best Christmas characters in the ocean, and the perfect way to end this ocean advent calendar.

We’d like to say an extra-special thank you to everyone who sent us ocean photos to use in this project.  We’re really sorry that we couldn’t use them all, but it was wonderful to see so much variety and everyone’s considerable enthusiasm for the sea.  Thank you so so much!  We really do appreciate it.

The advent calendar may have finished, but the ocean awesomeness isn’t over yet.  There will be plenty more in the lead-up to Sea Shambles at the Royal Albert Hall in 2020 (and it is going to be dramatic, massive, inventive and exciting show so do get tickets if you can).  But that’s all from us for this year.  Merry Christmas and a Happy New Year!