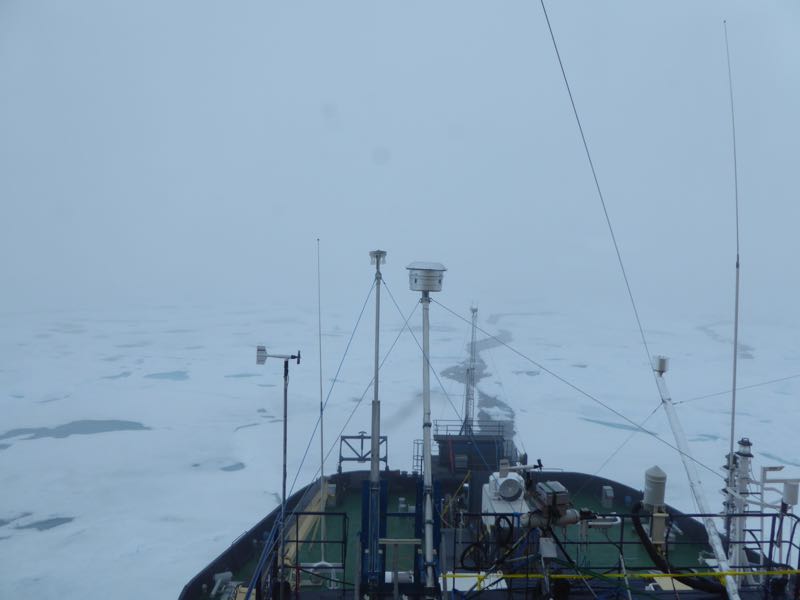 Time is an Invention That Ticks Away Inside the Ship 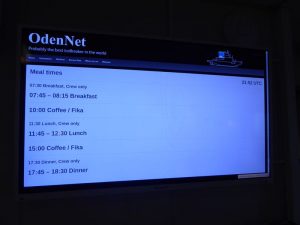 I’ve been on board Oden for eight days now, and the days are starting to merge together.  The ship’s routine is strict, with each day compartmentalised by mealtimes and ‘Fika’, which is the Swedish version of teabreak.  Time is an invention that ticks away inside the ship, irrelevant in the vastness outside.  The sea ice arrived suddenly at dinnertime on the third day, and since then we’ve been ploughing northwards through it, twisting and turning to avoid the thickest ice.

When I wake up, there’s a white-grey sky, and white-grey ice decorated with light blue meltponds and dark gashes of open water.  The ice floes may be curvy or straight, the visibility metres or miles, but the scene when I go to bed is mostly the same as it is the next morning.  The numbers on the latitude and longitude displays change as we creep closer to the pole, and mealtimes keep coming round.  I can’t unpack my experimental equipment yet, but there’s plenty to do: planning meetings, background reading, fika, polar bear safety training, learning about everyone else’s experiments and more fika.

I can summon night on a whim, just by closing the blackout curtains. And then it’s breakfast time again.  It would be relaxing if sleep was easy, but the gigantic engines down in the hull have work to do.  Once the bow has broken the ice ahead, the chunks are swept underneath,  sometimes straying into the propellers where they rattle around like cannon balls in a washing
machine until Oden spits them out behind.   There’s a lot of yawning during the day.

As we burrow further and further into the ice, the reality of the practical challenges ahead is sinking in.   Having breathing space now to get to know our shipmates is more than just pleasant pastime. Dinner on Saturday was declared a special occasion, and it’s astonishing how easy it is to create a social treat with the people you already see every day.  Tidier clothes, a special effort from the mess to step up a gear on their already-fabulous food, a bit more time to talk, and it did feel like a party. It was easy to forget the white expanse outside the window, or it would have been if it wasn’t for the vibrations as another ice chunk went through the prop.   But when we start work on the ice, we will be vulnerable and directly dependent on each other. It’s not just about getting the science done as we need to trust that safety measures are taken, that we’re looking out for each individual in the team, that people will speak up if there’s a problem.  Morale is a safety consideration.  And the morale is good as these are capable, fun and interesting people, who care and who work hard.   I have confidence that we’ve got a good team here, and that’s a good feeling. 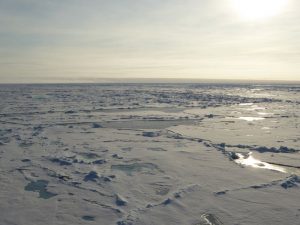 It’s funny how important the food is.  The crew look forward to Thursdays, because that’s soup day, and the favourite Swedish treat is pea soup and pancakes.  I’ve had it on board before, but I only learned today that they’re supposed to be separate courses as last time I was mostly with non-Swedish people and at least half took a pancake to have with their soup.  So now I can look forward to Thursday too, because this time I’ll get it right!

We expect to start looking for an ice floe to moor against in the next 4-5 days.  Setting up the ice station is going to be a huge task, but it’ll be our home for five weeks and I’m looking forward to getting started on the science that I’ve been planning for the past two years.