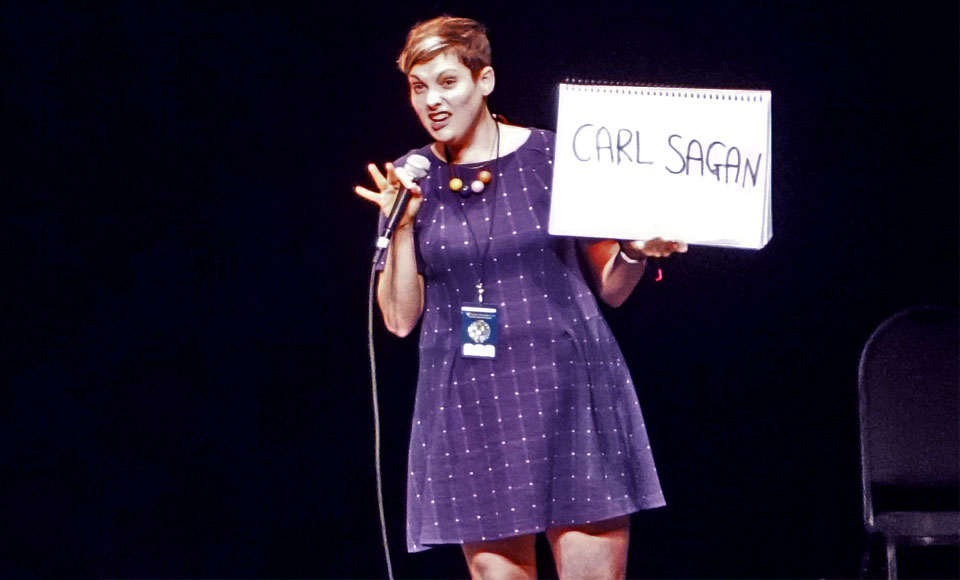 Following an Acknowledgement of Country from producer Trent Burton, the tour kicks off, as did every show, with a new short film made specially for the tour as puppet Robin Ince and Brian Cox researched the scientific history of Australia and New Zealand with the help of their new puppet chum, Tim Minchin. Huge thanks go to Tim (and his voice) for being a part of the tour while actual Tim was on Broadway preparing for the opening of Groundhog Day.

Real life Robin Ince then took to the stage to get things under way.  Except his microphone isn’t working.  An auspicious start to proceedings as he heads to the wings, Josie Long takes over from off stage, letting the audience know what’s going on with eating a banana while we fix Robin’s microphone and he suggests to the audience, we start the whole show again, right from the start of the video.  We don’t.  He returns, audible, and with tales of Brexit and robots going on dates.

Professor Lucie Green then got the science ball rolling talking about the work of Skylab and the advancements in our understanding of the sun. 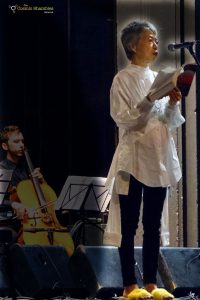 Our first local guest was cancer researcher Leigh Nicholson to chat about her research in cell biology.

Former host of The Einstein Factor, comedian Pete Berner followed and chatted about the differences between being on a science bill, and a normal comedy club night.

Next up it was Dr Karl Kruszelnicki himself, complete with Rubik’s Cube belt buckle. He proceeded to take the audience on a rollercoaster exploration of Murphy’s Law via ‘vaginal engulfment’. Beyond that he gave all the UK team helpful jetlag beating tips backstage.

The Sydney Ensemble string quartet then treated us to a special arrangement of the theme from Cosmos before being joined by the brilliant Lee Lin Chin with a spine tingling reading of Sagan’s Pale Blue Dot.  We hit interval only 20 minutes over time which made all the UK team very uncomfortable…

An often chaotic QnA with Robin, Dr Karl, Lucie and Dr Helen Czerski began Act 2 with audience members filling up our question box at the book stall during interval. 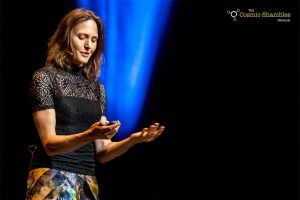 Afterwards Helen stayed on stage to convince our first Australian audience that ‘Bubble Physicist’ was in fact a real job.  She went on to discuss bubbles, physics, snot, cheese and penguins.

Next up was stand up mathematician who introduced Australia to his spectacular π-endulam. With the help of an audience member, a stop watch, a Mrs Macs Steak and Cheese pie (the most dense so the best for swinging if you’re wondering) and some cancelling out, he set about calculating Pi in the most ridiculous way imaginable.

Explorer and Environmentalist Tim Jarvis was next up with tales of Antarctic adventures and how we can convince companies to take climate change seriously.

Then armed with three tins of spaghetti and the help of some of history’s greatest thinkers, a very jetlagged Josie Long, yet to experiment with Dr Karl’s suggestions, set out to prove the existence of ghosts with a very scientific experiment. 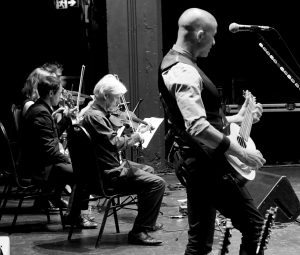 A Richard Feynman story from Robin Ince and the final guest for the evening took the stage, 6 time ARIA Award Winner Diesel.  Joined by the Sydney Ensemble quartet he brought the evening to a brilliant close with a parade of hits.

And we were only 30 minutes over-running.  The locals don’t seem to understand why we’re all in a stage of disbelief. 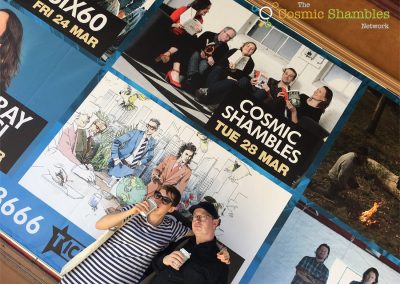 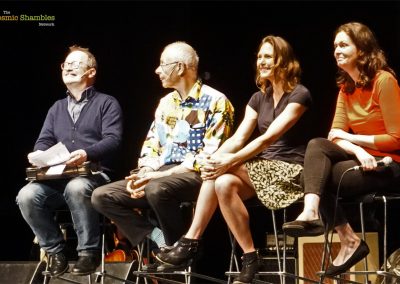 It was a mad QnA 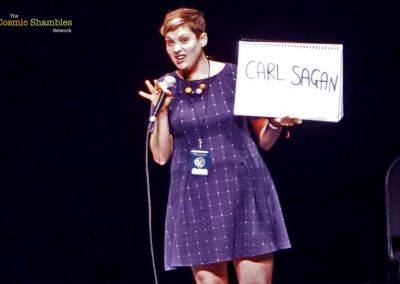 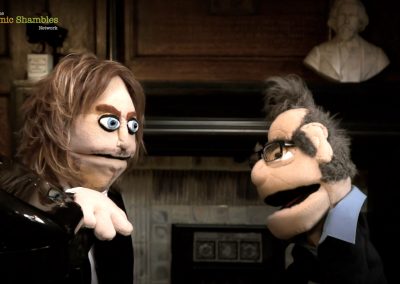 The intro film of the show 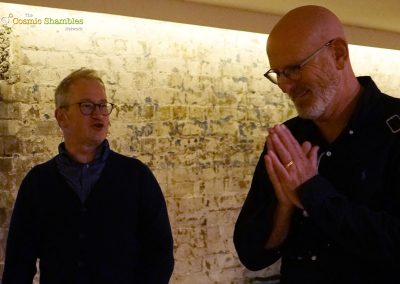 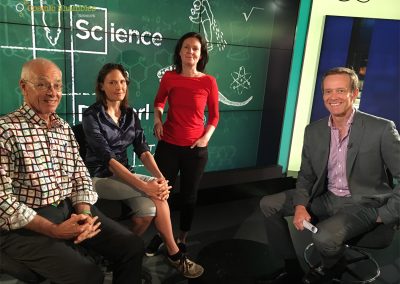 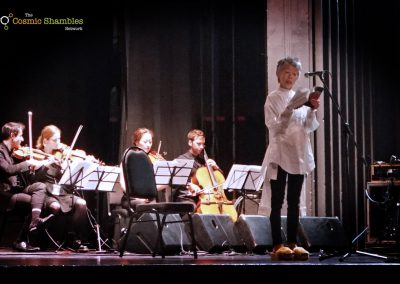 Look again at that dot. 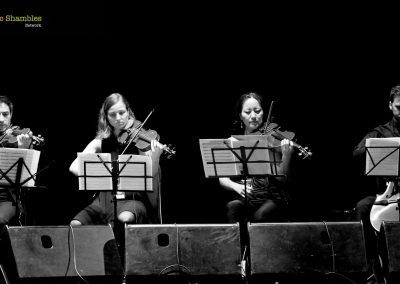 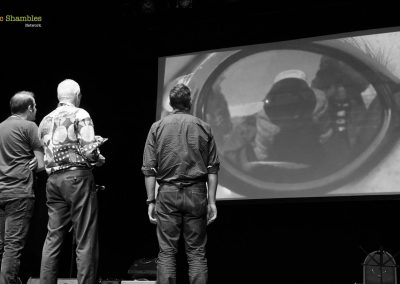 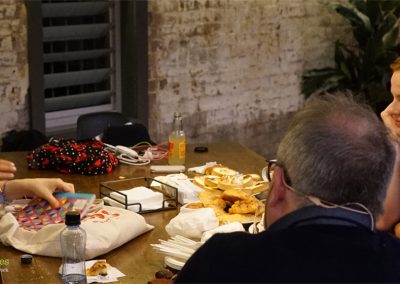 Science chat in the green room 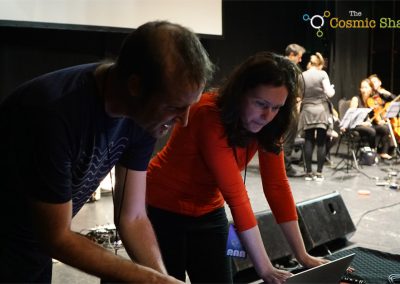 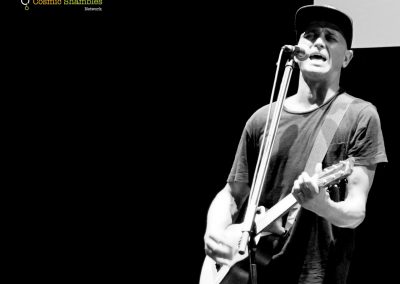