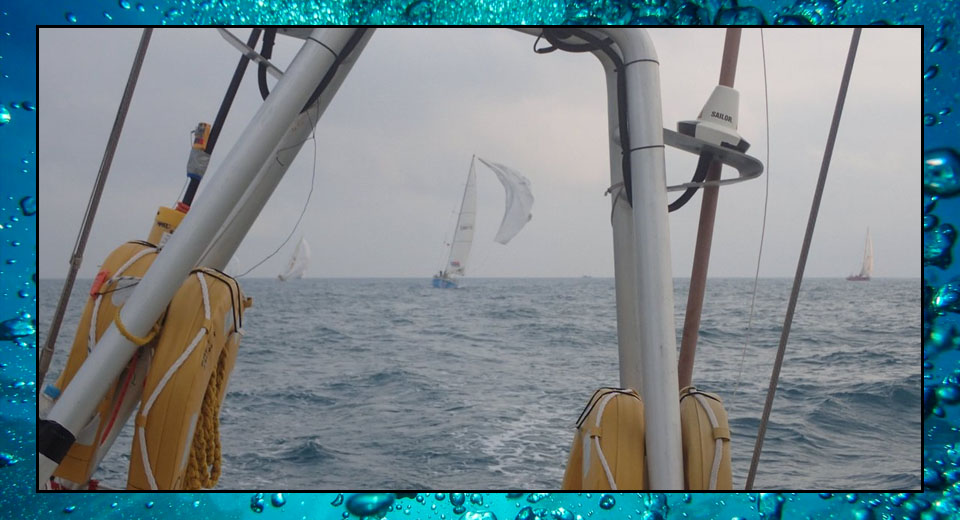 The Age of Sail by Helen Czerski

The age of sail is not quite gone.

Today’s picture was sent in by @Gulfie , and there are also photos below from @Evaoutside and @MelvynJohnJone2

This photo started me thinking about the Age of Sail, the name sometimes given to the three centuries (1550s-ish to 1850s-ish) when sailing ships explored the globe and established new trade routes across Earth’s vast oceans.  Sailing today tends to be associated with weekend leisure trips or races, and the excitement of a big trading vessel approaching a harbour under a vast expanse of sail, having crossed the world from impossibly exotic places, has been long forgotten.

So we tend to associate sails with the past, when humans had to take a more primitive and uncertain approach to travel and were forced to rely on the wind to push them around.  But sailing technology hasn’t stopped developing, and committed lovers of sail haven’t given up.

Some sailing technology gets a lot of press.  Exhibit A is the collection of weird and wonderful Americas Cup vessels which only have the most tenuous, although strictly regulated,  connection to the ocean.  The boats (if you can call them that) in the “winged catamaran class” are extraordinary creations: a huge wing with a token catamaran attached, capable of travelling far faster than the wind that’s propelling them.  They whoosh along above the ocean surface, barely touching the water. This is beautiful engineering, but it’s unlikely to find too many practical applications any time soon.

The original Age of Sail carried goods all over the world, and the global fleet of 50,000 cargo vessels carries on that tradition.  There’s a great online tool at Shipmap.org which lets you track the world’s ships from 2012 onwards.  And the band at the top also shows you the problem: shipping contributes about 3% of global carbon emissions, and that number is steadily rising.   This is the sail enthusiast’s toe in the door.  There’s a reason that sailing cargo vessels disappeared: they were slower and more expensive than steamships.  But now that we’ve got a better idea of the long-term costs, and also plenty of swanky new light strong materials, perhaps powering ships using the wind isn’t the backwards step that it would once have seemed.

What might new sailing ships look like?  Sadly for fans of the Cutty Sark and her extensive complicated rigging, the first answer is: probably not like that.  But there are plenty of interesting ideas out there, with the International Wind Ship Association doing all it can to hustle them along.  There are rotor sails, and suction wings, and kites and plenty more things that sound as though they come from a Technologies Of The Future pamphlet from the 1950s.  But perhaps the most realistic first step is the cautious one.  During the last ocean propulsion transition, some ships were built with both sail and an engine, and the hybrid model may be coming back.  There are proposed wind-powered technologies that could be installed on the top of an existing ship, contributing only 10-20% of the total propulsion that the ship needs, but still acting as a step in the right direction.  Tall rotor sails may not have the romance of an old wooden ship in full sail, but I’d be excited to see one come into harbour.   It’s hard to predict how quickly they’ll appear, and how much of the heavy lifting they’ll be able to do, but I’m excited about the possibilities.

For those impatient to start buying sail-propelled goods, I have good news, as long as you’re a fan of olive oil, wine, chocolate and coffee (and almost everyone must tick one of those boxes, right?).  The Sail Cargo Alliance is the umbrella organisation for a range of smaller sailing ships that are already transporting cargo around the world. The current fleet is quite small, but it’s worth keeping an eye out for them visiting a port near you. I’ve currently got a bottle of olive oil on my kitchen counter that was brought by sail from Portugal by the Raybel, and very nice it is too.

Wind power helps all sorts of wildlife travel across the ocean, and perhaps this is a nudge to remember that we’re just another of Earth’s animals after all.  The New Age of Sail could be just around the corner.